Uncomfortable in the Light, Algeria’s Generals Still Refuse to Retreat to the Shadows 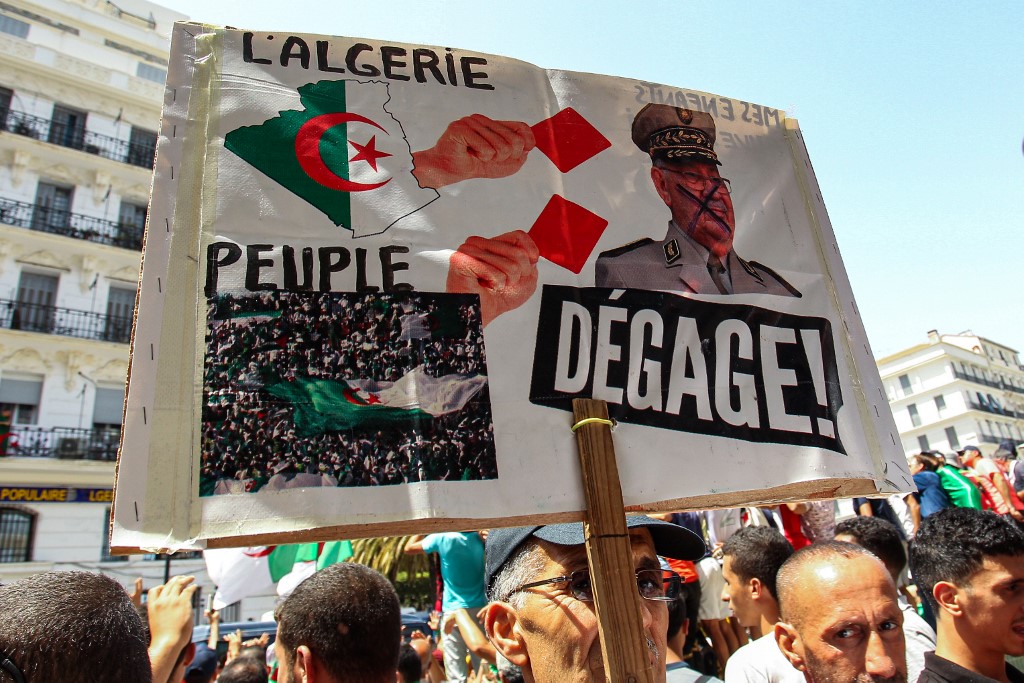 Even in the capital of another country, Algeria’s interim president could not escape the sight of thousands of his fellow citizens, waving flags and singing songs. On a recent afternoon in Cairo, Abdelkader Bensalah looked out on an exuberant crowd at the Africa Cup of Nations final as Algeria beat Senegal 1-0. Back in Algeria, thousands took to the streets, as they have done every single Friday since February, calling for a civilian state and the dismantling of the old regime, including the removal of the army from politics.

This stand-off between the government and the protesters has gone on for months, with no end in sight. But this is not a static stand-off. Algeria’s army has not maintained its extraordinary power within the state by waiting for others to tell it what to do. Behind the scenes, the army has started picking off protesters and politicians who stand in its way, paving a path for a confrontation it hopes to win. It was the army that started this transition and it will be the army that determines how it ends.

When Abdelaziz Bouteflika announced in February that he was seeking a fifth term as president, protesters took to the streets of the capital, Algiers. Once it became clear they were not going away, the army – and in particular its chief, General Ahmed Gaid Salah – sided with the protesters in getting Bouteflika removed from office. The general is now his country’s deputy defense minister, although he wields more power than his government position would suggest.

His political role has placed the army in the spotlight, an uncomfortable position for an institution that prefers to exert power from the shadows. The protesters don’t like it either and have made Salah the focus of their ire, openly calling for him to go. Along with opposition parties, they rejected holding presidential elections on July 4 and insist that any transitional body that prepares the country for elections should include no officials from the Bouteflika era – a demand that is impossible for the army to fulfil. With the possibility of a new president who may cut its enormous budget and privileges, the military still expects to vet any new candidate for the job.

General Salah could use the army to clear the streets by force and thus break the popular protest movement apart. It is clear that he has become irritated by them, referring to them as “enemies of Algeria.” But the backlash from within the institution itself would be severe. The army, after all, is made up of individuals, most of whom genuinely believe themselves to be guarantors of public stability, but there is no guarantee that any military chief who ordered such open repression would not be removed.

Instead, Salah is using more subtle methods. He is weeding out the obstacles, the aim being to either facilitate a negotiation or to bring about the gradual demise of the protest movement by splitting it – a classic “divide and conquer” maneuver.

He began by picking off the politicians first. In April, the general launched an anti-corruption drive that has targeted many of the most senior people in Bouteflika’s inner circle, including prominent businessmen, politicians and even two former prime ministers. All are now languishing in jail.

The following month, he made his most daring move so far, with the arrest of Bouteflika’s younger brother, Said, and two powerful former intelligence chiefs. Said Bouteflika was seen as a key aide to his older brother, particularly after the latter suffered a stroke while in office. Arresting Said was a clear sign of a break with the old regime.

This has put the opposition in a difficult position. On the one hand, opposition activists in Algeria want the old regime to be swept away. They should, therefore, welcome the anti-corruption drive. On the other hand, the way it has been conducted gives rise to suspicions that Salah is merely using it to get rid of opponents and pave the way for a new version of the old system. The arrests have targeted three of the four “branches” of Bouteflika’s circle: politicians, businessmen and the intelligence services, leaving only one – the army – unscathed.

Next, the army turned its attention to the protest movement, arresting some opposition activists and closing down websites that are sympathetic toward them. Then, in early July, the army tried a new tactic: Salah banned the Berber flag from rallies and began arresting dozens of protesters for displaying it. Berbers, the indigenous people of Algeria before the arrival of Arabs, have played a vital part in the protest movement. By threatening those who brandish the Berber flag with steep fines and prison, Salah aims to inject an ethnic element into the protest movement, thereby dividing it.

The tactic hasn’t worked so far. The protests continue and last week’s football win was a fillip for the protesters as Algeria’s national football team has both Arab and Berber players.

As the demonstrations stretch into August, a confrontation with the army appears inevitable. The protesters believe they can win by convincing the army that public opinion wants them to go back to the barracks. With his efforts to split the protest movement, General Salah wants to deny them the power to speak for the wider public.

His strategy of pruning the protest movement and rival politicians is strategically clever. But it is also politically risky. As the public face of the army, there was always a chance that his political role as deputy defense minister would position him for a run at the presidency. But the longer he stays in the spotlight, the worse his position becomes.

Algeria’s army has thrived by remaining in the shadows. General Salah is now a target for the protesters. It is no longer implausible that he will manage to break the protest movement piece by piece, only to find the institution he leads will cast him aside before retreating to the shadows.