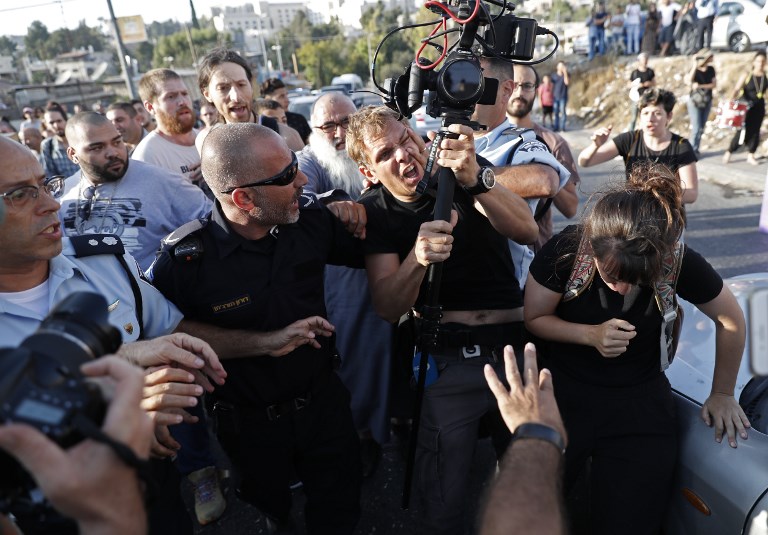 Before Twitter and smartphones revolutionized the way political struggles are documented and understood, Palestinians used hand-held video cameras to capture the daily reality of life under Israeli occupation. Unsurprisingly, Israel never looked favorably on having any form of attention cast on its conduct with Palestinians. And so, like clockwork, internal calls to criminalize the simple act of documentation have reignited in the wake of the recent protests in Gaza.

Coupled with the Israeli high court’s rejection of a legal challenge to end the army’s policy of shooting unarmed protesters, Tel Aviv is signaling once again that its war on unarmed Palestinian resistance will continue unabated. Perhaps most shocking of all is the latest attack on Palestinian medical personnel tending to wounded protesters in Gaza. Dressed in a white uniform with hands up in the air, volunteer paramedic Razan Najjar was shot and killed by Israeli soldiers on the border late last month. The 21-year-old medic’s story will surely bring attention to the grave escalation of force Israel is using against defenseless protesters and medical personnel.

But the issue of documentation is not a new story. Back in 2005, the Israeli human rights organization, B’Tselem, began its own video project. Using funds from a variety of donors, including large international NGOs, B’Tselem gave Palestinians handheld video cameras with one simple directive: film your interactions with soldiers and life under occupation. In essence, B’Tselem began training a new generation of Palestinian citizen journalists long before social media took off.

Thousands of hours of footage later, B’Tselem’s video project is a critical counterweight to Israel’s constant downplaying of human rights violations in the occupied territories. Countless times over the past 12 years, the organization’s footage forced Israeli civilian and military officials to face the facts of what is happening on the ground. It is no wonder lawmakers want to criminalize the program.

Last month, a new bill proposed to the Israeli parliament by the right-wing Yisrael Beiteinu party explicitly referenced B’Tselem’s video project. Backed by Israel’s defense minister, the bill calls for a prohibition on photographing or documenting Israeli soldiers. “Anyone who filmed, photographed, and/or recorded soldiers in the course of their duties,” the bill states, “with the intention of undermining the spirit of [Israeli] soldiers and residents of Israel, shall be liable to five years’ imprisonment.” The bill goes on to cite the work of B’Tselem and “various BDS [boycott, divestment and sanction] organizations” that have been documenting the behavior of Israelis soldiers for years.

As with similar draconian bill proposals that regularly pop up in parliament, it is unclear if this one will become law. But it is clear that Israel is moving forward with measures to target, imprison and sometimes maim those that document the horrors of occupation and the conduct of the Israeli military in its maintenance of the occupation. It doesn’t matter if there is an outbreak of violence on ground, Israel understands the optics of its lopsided conflict with the Palestinians and wants to ensure its narrative is dominant.

Lawmakers understand how the imbalance of the conflict – whereby a state armed with nuclear weapons occupies the land of an essentially defensive civilian population – could erode any international support if fully visible to the world. As such, efforts such as the B’Tselem video project pose a clear and present danger to Israeli security as it is understood in Tel Aviv. In fact, any form of unarmed resistance runs the risk of highlighting the imbalances Israel wants to hide.

Just look at the events in Gaza last month. Thousands of unarmed Palestinians confronted Israeli soldiers who responded by killing upwards of 100 people including women, children, medics and journalists. Thousands were injured as Israeli snipers picked off protesters from heavily fortified positions. On the Israeli side, a handful of soldiers suffered light wounds, mostly from rocks thrown by protestors. In response to Israel’s reckless use of force, several NGOs challenged the military’s use of live fire against demonstrators who didn’t pose a danger to human life.

The request for an emergency hearing on the rules of engagement was swiftly rejected by the high court, despite compelling arguments by lawyers representing the NGOs. In his opening remarks, the Israeli attorney Michael Sfard told the court that “the use of deadly force against a civilian is only permitted if that civilian poses an immediate danger. These are the rules of international law.” He continued, “We are dealing with the most dramatic power the state has – to injure, to wound, to kill. This isn’t the place for legal games.”

Criminalizing those that bear witness to injustice is not unique to the Israeli-Palestinian conflict, nor are attacks on unarmed protesters. We have seen similar stories play out in South Africa, other parts of the Middle East and even in the United States.

Yet, Israel’s ability to dominate the narrative for so long is one clear difference with the Israeli-Palestinian conflict. That the state has administered one of the longest military occupations in modern history, and is still able to speak about its right of self-defense while attacking unarmed protesters, is extraordinary. As the current set of rulings and bills demonstrate, Israeli lawmakers prefer the horrifying gravity of the occupation be left out of public discourse and have been pretty successful in doing so for decades. Given the speed at which information travels today and the resurgence of Palestinian unarmed resistance, the calculations might soon change.