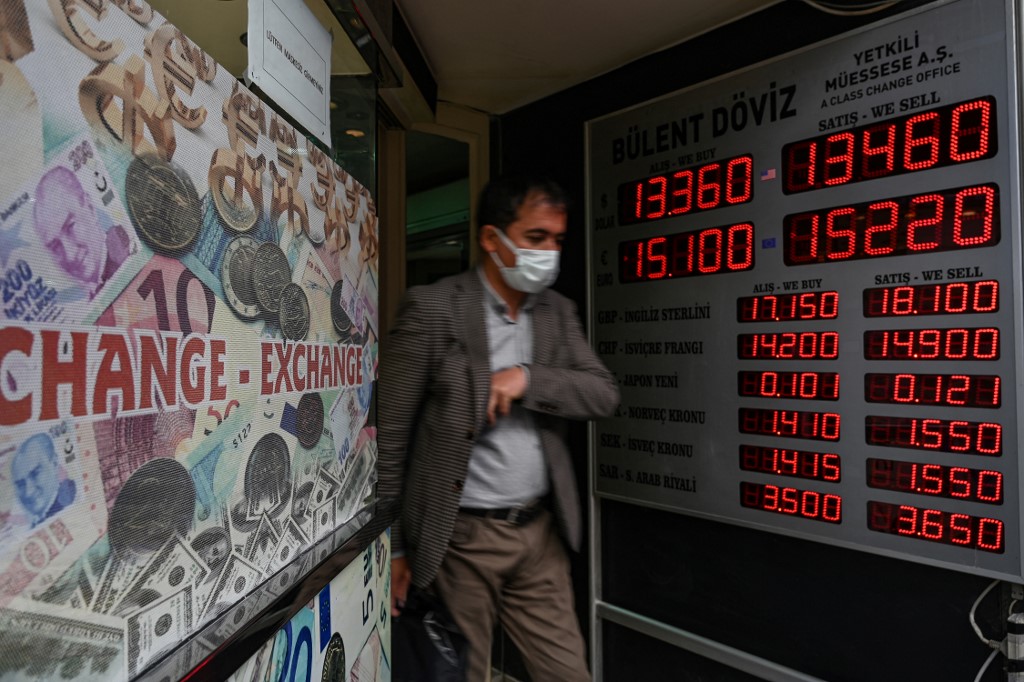 In less than a year, the Turkish lira has lost up to 45 percent of its value against the dollar. The continued meltdown of the currency is one of the worst economic crises Turkey has ever faced. Yet, the government refuses to take a step back from its failing economic policy.

Installed after the 2015 presidential elections, the current economic model is rooted in the idea that low interest rate policies are disinflationary – a theory, put forth by 20th century American economist Irving Fisher. This school of thought resonates deeply with President Recep Tayyip Erdogan, who strongly believes that high interest rates are the “mother and father of all evil.” But his government’s risky strategy runs counter to most conventional thinking on how to tackle the high inflation levels around the world. Many countries have either raised interest rates or plan to do so, Turkey instead decided to cut them. The result of the Turkish approach has compounded the lira’s steady depreciation. With the dollar this week fetching as many as 14 liras, those set to lose the most from this irrational economic experiment are Turkish families.

Erdogan explained to the nation on television that the government’s recent interest rate cut was intended to encourage foreign investment and boost jobs, exports and growth. This, he claimed, would lead to lower inflation. The scenario that higher exports would save Turkey’s economy in 2022 seems highly dubious.

This action plan is faulty from the start on three accounts: First, the policy has already given rise to annual inflation estimated to be as high as 20 percent; second, the global pandemic has caused an ongoing strain on the supply chain limiting access to raw materials; and third, most of Turkey’s energy is imported.

Former treasury advisor and economist Mahfi Egilmez is convinced that Erdogan’s trust in this strategy is misplaced. For the “low interest rates equals low inflation” economic model to work, the basic economic indicators are not to be tempered with.

Economist Refet Gurkaynak echoed Egilmez’s sentiment: “Inflation is not like cholesterol. We don’t need someone else to measure what we can see for ourselves. Does anyone believe that it is going to go down, just because it is said so.” Most experts fear that this course of action based on unreliable numbers and data could tip Turkey’s economy towards hyperinflation.

Regardless, Erdogan has held his ground, going as far as calling this “the economic war of independence” against foreign powers jealous of Turkey’s success and “the interest rate lobby” meddling in its affairs. Unfortunately this rhetoric still resonates with the voter base of his Justice and Development Party. But the question is: For how much longer?

Each day Turks are increasingly feeling the economic strain of their declining purchasing power. The pandemic had already given rise to kitchen inflation that has now hardened its grip on Turkish consumers. In less than a year the cost of chicken has increased by almost 70 percent; milk is up by 37 percent, and sunflower oil – a major ingredient in many households – has surged 40 percent. As foodstuffs get more expensive, some have resorted to stockpiling before the prices climb higher. In response, to avoid running out, supermarkets and grocery stores have started to limit how much of one item shoppers can buy. Sugar, oil and coffee have all been affected.

The result is a big financial hit for the population. The MetroPOLL research company’s report of November found that 71 percent of those asked believed they “had gotten poorer over the years.”

The most concerning flaw in Turkey’s unorthodox economic approach is the impact on the lowest earners. Although the government in recent years has refused to disclose the number of people on the minimum wage, the last figure in 2014 placed it as high as 40 percent. Due to the plunging value of the lira, the minimum wage dipped to just $295 per month in November.

Pushing for a growth at all costs economic ideal requires interest rates to be regulated in favor of foreign investors and exporters. This leaves low and middle-income families behind. Since 2013, Turkey has suffered a decline in its GDP per capita, which fell to $8,538 in 2020.

That there are no institutions in place to regulate state decisions only lowers the trust necessary for a stable marketplace – something that should be the prerogative of Turkey’s central bank.

The bank, however, has lost legitimacy due to Erdogan’s attempts to erode its independence. This is particularly unsettling for future investors and does not inspire confidence despite the cheaper lira and labor costs.

The deepening economic crisis is the result of an unhealthy political system in need of rehabilitation. The lack of competence at the executive level has been triggered and then hidden by a lack of transparency. The government’s unyielding attitude to keep up this economic approach is only making matters worse. Turkey’s consumer confidence index dipped to an all time low of 71 points in November. Economist Mustaf Sonmez deems this to be a strong indicator of growing mistrust towards the government.

Things are not looking up in 2022. Turkey is expected to pay off $168 billion of external debt in the next 12 months – something made much harder by the weakening lira.

Over the years, the ruling Justice and Development Party’s political rise has been built on the backbone of economic stability. Today, not only is economic stability a bygone promise, but the presidential goal for Turkey to be among the world’s top 10 economies now seems like a pipe dream.