Turkey and Israel’s Fraying Ties Go Beyond Erdogan and Netanyahu 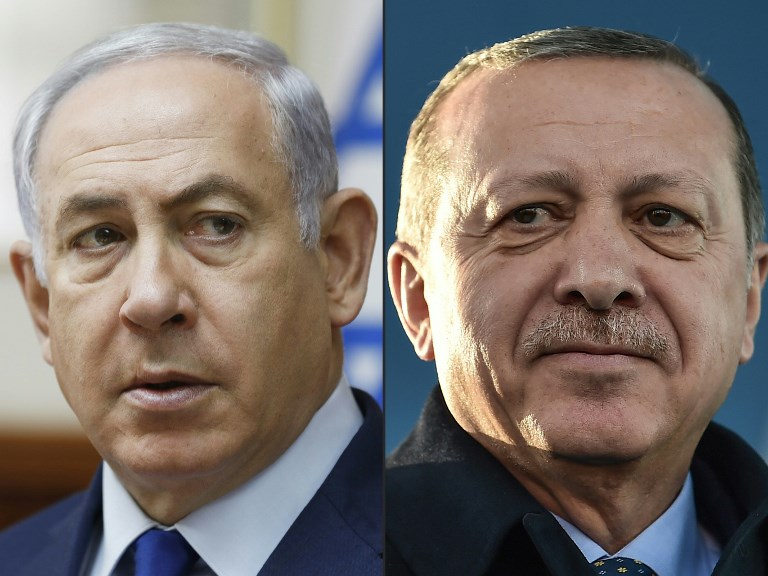 Turkish-Israeli relations are going from bad to worse and there is not much light at the end of tunnel. Those who believed Turkey and Israel should be able to work together based on shared economic and strategic interests – strong trade, energy cooperation, stability in Syria, containment of Iran – often make a simple point: the two countries would get along much better once Recep Tayyip Erdogan and Benjamin Netanyahu are out of the picture. Recent developments are proving them wrong. The bloodbath in Gaza, the shifting of the US embassy to Jerusalem, the undeclared Israeli-Iranian war in Syria and Turkey’s economic and political cooperation with Iran (despite past, present and future American sanctions) are all critical developments that transcend the Netanyahu-Erdogan problem. The problems in the bilateral relations are clearly becoming structural and insurmountable. Under these circumstances the best option for Turkey and Israel will be to compartmentalize problems and engage in damage control by shielding trade relations that have continued to grow against all odds.

The most obvious signs that Turkish-Israeli problems go beyond bad chemistry between Netanyahu and Erdogan are the worsening regional dynamics, particularly in the Palestinian territories and in Syria where the escalation in military confrontation between Israel and Iran is rapidly moving toward a precipice. Given its higher visibility, the escalation in Gazza with the Israeli Defense Forces killing of dozens of Palestinians is a particularly daunting challenge that triggers Turkish public opinion at large, not just AKP voters and Erdogan supporters. Erdogan’s support for the Muslim Brotherhood in Egypt and Turkey’s cooperation with Islamist groups in Syria are polarizing issues in Turkish domestic politics. But the Palestinian question is not. Turks from diverse political backgrounds – conservatives, secularists, Islamists, nationalists – are all in the same camp when it comes to anger against Israeli military action against Palestinians. This is why the sight of Israeli troops shooting dead Palestinian protestors is something that is hard to digest even for ardent secularists in Turkey who normally complain about Erdogan’s support for Hamas.

Moreover, let’s not forget that Turkey is now in electoral campaign season, thanks to Erdogan’s decision to call snap elections on June 24. Naturally, Erdogan decided to capitalize on the developments in Gazza by calling for an emergency meeting of the Organization of the Islamic Conference. The same day, Ankara recalled its ambassadors in Israel and the US. The fact that the bloodbath in Gaza came on the day the Trump administration officially moved the US embassy to Jerusalem while the White House declared unwavering support for Israeli military action exacerbated the public outcry in Turkey. Given high public support for the Palestinian cause, this situation allowed Erdogan to ratchet up his anti-Israel discourse. Erdogan described the actions of the Israeli forces as a “genocide” and Israel as a “terrorist state.” “No matter from what side, whether from the United States or Israel, a terrorist state, I curse this humanitarian plight, this genocide.” Erdogan said. Prime Minister Binali Yildirim said the US was an accomplice in a crime against humanity.

Although Erdogan and the AKP should be careful in using the term “genocide,” given the country’s problems on the Armenian front and Western claims that Turkey itself committed genocide in 1915, the mood in Turkey is increasingly nationalistic and resentful towards Europe and the United States. It is therefore not surprising that not only Erdogan but also all the opposition parties in Turkey have condemned the US move, the violence in Gaza and the silence of the United Nations.

These worsening dynamics on the Israeli-Palestinian front will make any expectation of even a superficial normalization in Turkish-Israel relations unrealistic. Those who blame Erdogan and Netanyahu for the problems should remember that the so-called “golden years” of Turkish-Israeli strategic partnership came in the mid- 1990s when the Oslo Peace Process provided much needed cover for Turkish decision makers. To be sure, the Turkish military was the real force behind the 1997 military partnership agreement with Israel. But even this bastion of secularism could not have pursued such a transparent alliance with Israel in the absence of some hope and normalcy on the Israeli-Palestinian front. It is also important to remember that Erdogan had much better relations with Tel Aviv between 2006 and 2008, when Ankara played a useful role as a mediator between Syria and Israel. In that sense, momentum toward peace was always a crucial “legitimizing” factor in selling good relations with Israel to Turkish public opinion.

Today, we are far away from a peace process in the Middle East for reasons that go well beyond Erdogan and Netanyahu. Hamas is in charge of Gazza. Iran and Israel are on the brink of war in Syria. The US seems to have given up the role of an honest broker. And Trump’s decision to pull out from the nuclear deal with Iran creates new tensions. The regional dynamics are not conducive to stability, let alone peace. There is not much Erdogan or Netanyahu can do to change these tectonic shifts in the regions.

Perhaps more important are domestic shifts in Turkey and Israel. The demographic and political realities in both countries are moving toward religious conservatism and nationalism. Erdogan and Netanyahu are more symptom than cause. They exploit and skillfully navigate in this new reality of their domestic context, which will remain when they are out of the picture. This is why the expectation of a quick fix to the Turkish-Israeli problems is unrealistic. What can be expected is that both countries will have vibrant private sectors that continue to do business despite the political environment. Such compartmentalization, by isolating the trading sectors from the war of words between politicians, is the best strategy for both.