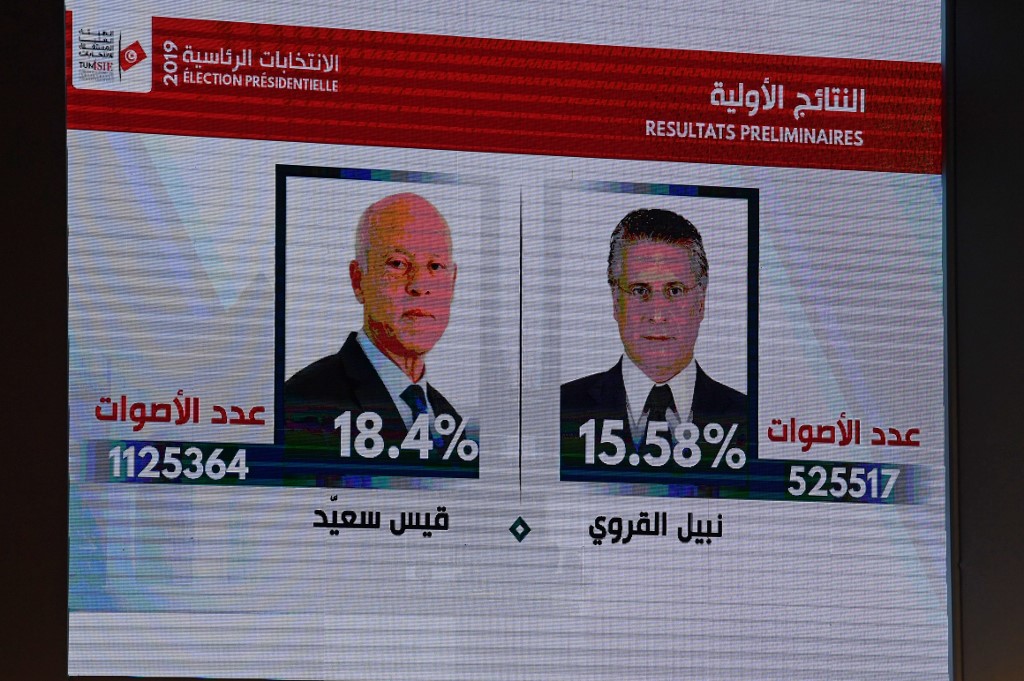 By last Sunday evening, as the results began to trickle in of only the second presidential election since Tunisia’s revolution, it was clear a political earthquake was beginning. The front-runners were not the current prime minister, nor the candidate of the largest political party in the parliament, nor yet a previous president. Instead, the two front-runners were Nabil Karoui, a media mogul who is currently languishing in jail, and Kais Saied, a little-known expert on constitutional affairs. When the public chooses a president in the second-round run-off in a matter of weeks, they will have to choose between a professor and a prisoner.

“We received the message sent by the Tunisian people,” said the prime minister, Youssef Chahed, accepting defeat in an election in which, only months ago, he was the front-runner. The message seemed to be that the Tunisian public had tired of the infighting that has dogged politics for at least the last year and, when offered the choice of a range of established political figures, chose “none of the above.”

Yet if Tunisians are hoping for a significant change of political direction, they are likely to be disappointed. The two outsiders who are now the front-runners will not be able to break the political deadlock, because it is rooted in the nature of Tunisia’s post-revolution political consensus. Without a significant mandate or a strong party machine, whoever wins the presidency will remain a political loner.

Tunisian politics has been in turmoil for at least a year, since the end of a government coalition between Nidaa Tounes and Ennahda. Further divisions between prime minister Chahed and the former president, Beji Caid Essebsi, who died in office in July, paralyzed the government.

Ending the political deadlock was precisely the reason for calling a new election. Badly needed economic reforms have stalled amid months of wrangling, with the blame placed on a division of political powers between the president and the prime minister.

In March, Essebsi lamented that the presidency had “no major functions” and called for the constitution to be amended. After he died, his ally, the defense minister and presidential candidate Abdelkarim Zbidi, said he would re-write the constitution if he were elected.

That will not now happen; even if someone else proposes it, it is unimaginable that a new parliament will simply give up its own power to an outsider president. And therein lies the problem for the new president, and the reason why Tunisian hopes for a new political direction are likely to be dashed.

Real power in Tunisia is vested in parliament, not the presidency. Devoid of the support of a political party, either Saied or Karoui will find himself having to contend with established parties, with their own goals. Most probably, the parliamentary parties will basically co-opt the president on some issues and sideline him on others, continuing with the business of government without his input.

In responding to this, each of the front-runners will face his own difficulties. As an intelligent but uninspiring speaker, Saied is unlikely to be able to make great use of the power of the presidency’s “bully pulpit” to rally public support to gain leverage. For Karoui, already imprisoned on charges of tax evasion, which he denies, his business empire makes him vulnerable to politically motivated investigations.

But there is a wider reason why Tunisia’s politics is stuck, and why this presidential election is unlikely to break the deadlock. For many years, the primary focus of parliamentarians has not been fixing the country but maintaining a functioning state.After the re-emergence of the previously banned Islamist party, Ennahda, the great concern was that the party would either seek to take over the government entirely – a charge leveled by at as Mohamed Morsi’s Muslim Brotherhood in Egypt – or cause such division that the political system imploded, as happened in other post-Arab Spring countries.

To alleviate that concern, Ennahda made it a core part of its politics to support the political system, even at the cost of the party’s own success. But that has led to years of compromise, of cozy coalition and even, critics charge, to the outright collusion of the political classes against the people.

It is this lack of genuine change that has made Tunisians so frustrated. Unemployment is at 15 percent and terrorist attacks have affected the key tourism sector. Since 2016, when Tunisia agreed a loan with the International Monetary Fund, Tunisia’s currency has tumbled against the dollar, pushing up the price of living.

The revolution was borne of a desire for serious change. But so concerned were politicians at the possibility that the system would be upended that they plumped for political stability over political change. Future historians may judge that was the right choice; current voters certainly don’t think so.

What ails Tunisia is a lack of real politics. What this election needed was a political leader to emerge with an invigorated political mandate. That could have come from a surge of support for, for example, Chahed, or for one of the established but outsider candidates, or from the outright victory of one candidate.

So far, Tunisians have ended up with neither. The success of outsider candidates has merely handed power back to the insiders.