Trump’s Military Doctrine: Let Others Do the Fighting 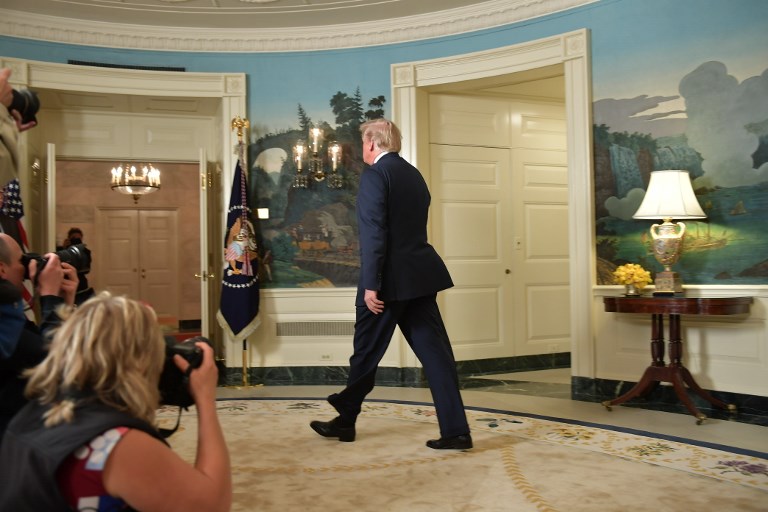 At the start of Donald Trump’s first cabinet meeting of the year, the television cameras were allowed in for a handful of questions to the US president. His remarks offered a valuable insight into his current military doctrine with regard to Syria and Afghanistan, two countries where he has pledged to reduce the number of US soldiers or remove them entirely. That doctrine can be summed up as: let everyone else fight.

Recounting a discussion on Afghanistan he had with US generals, the president asked why US troops were getting between ISIS and the Taliban in a specific area of the country. “Why don’t you let them fight? Why are we getting in the middle of it?” he asked the generals. “Let them fight.”

He evinced the same lack of caution over what might happen after US troops leave Syria, saying Iran “can do what they want” in the country once the drawdown happens – a remark guaranteed to spark concern among America’s allies in the region.

The comments fit Trump’s preference for a hands-off approach to foreign policy. But they also suggest a worrying lack of concern or understanding for the consequences of a sudden withdrawal, from Syria or Afghanistan. The resulting vacuum would be filled by those opposed to US policies, and past experience suggests that could create a situation that would be even worse in the future. Both Bill Clinton and Barack Obama made that mistake, and it cost them dear. Trump may be making a similar error.

His views, though, fit a long tradition of anti-interventionist thought in the United States, where, protected by two large oceans, the US has not faced the same threats from neighbors as in other places. That insularity means many Americans are happy to ignore the rest of the world as long as they are all right.

After the debacle of the Iraq war, that feeling has been reinforced. Avoiding the mistakes of Iraq and the George W Bush presidency have become a guiding light for US politicians. But that anti-interventionist attitude has often cost the US dear. Many presidents have tapped into that belief and tried to extricate the US from its various global wars, only to find that US withdrawal gives America’s enemies a free hand.

The last two Democrat presidents both made that mistake. In the 1990s, even after the attack on the World Trade Center in 1993 and the bombings of US embassies in Kenya and Tanzania in 1998, Clinton was reluctant to get involved in a foreign conflict in Afghanistan, where Al Qaeda was based. After the September 11, 2001 attacks, the criticism was repeatedly made that Clinton missed his chance to disrupt Al Qaeda, kill Osama bin Laden and stop the 9/11 attacks from happening.

Something similar happened over ISIS with Obama, who has been criticized for not paying the group sufficient attention after it arose in Iraq. A lack of attention allowed it to grow and embed itself across the country. Leaving the territory to other groups only made them ultimately more dangerous to the US.

Trump’s civilian perplexity over the extent of US involvement in foreign countries is certainly matched by that of many ordinary Americans. He has repeatedly expressed surprise that the US should play such an outsize role in world affairs, whether through the amount of money given in aid or through the military protection afforded to allies.

But it is the casualness of his remedies that are concerning. His suggestion that Japan, which is protected by a US nuclear umbrella, should simply develop its own nuclear weapons would overturn decades of settled US policy.

That doesn’t mean there is no merit to the criticisms Trump is making. There is, certainly, a self-replicating tendency among the military and the intelligence services, repeatedly doing things they have always done, particularly when doing those things means more funding.

So it is right for civilian politicians to come in and ask hard questions. But sometimes, particularly with Trump, it seems as if he lacks a deeper knowledge of the context.

In Afghanistan, the current situation is in large part a result of a devastating US assault on the country. If the US were to simply leave, groups like ISIS would be able to thrive and easily overwhelm the Afghan government. That could be catastrophic — for the Afghans, for their neighbors and for whichever countries ISIS and Al Qaeda decided to target in their newly discovered safe havens in the country. There would similarly be repercussions from a sudden departure of US troops from Syria.

The point is not whether the departure of US troops from either country is a good policy in itself; it’s the failure to appreciate the effect of a sudden departure, and the consequences of which groups might fill that vacuum.

Inaction or the deliberate creation of a vacuum carry consequences. It is certainly true that the US cannot be involved in every conflict. Nor should it. But disentangling decades of US involvement in foreign countries cannot happen overnight, or simply by presidential fiat. Many countries have invested considerable treasure and the blood of their citizens into backing US policy, and Trump owes them a careful plan.

It is understandable, by not wishing to repeat the mistakes of George W Bush in Iraq, that Trump might see walking away as the simplest option. But in seeking to avoid the errors of the last Republican president, Trump is in danger of making the same mistakes as the last two Democratic presidents.