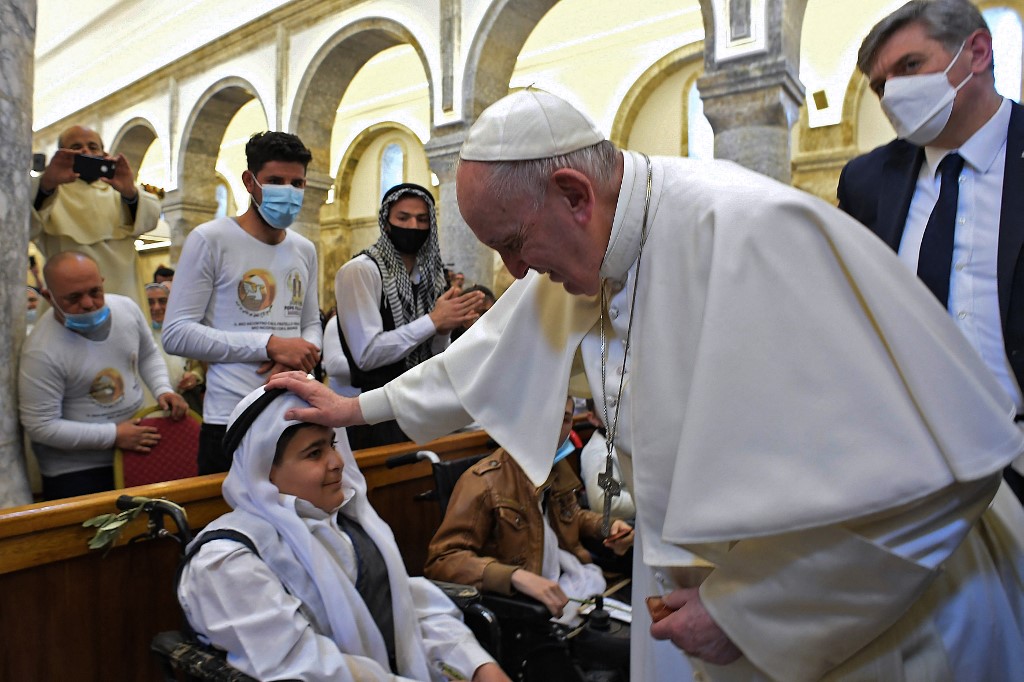 The scenes from Iraq for the Pope’s four-day visit are nothing short of remarkable. Iraqis refurbished churches that had been desecrated and destroyed during the occupation of parts of the country by ISIS; they stood on streets waving Iraqi flags to greet the pontiff and Iraq’s leaders were beaming as they hosted the Pope’s first trip since the Covid-19 pandemic began. It was a rare respite from the various kinds of violence and political agitation that have characterized news from this pivotal country for the past two decades.

The signs welcoming Pope Francis said, “Welcome to Mesopotamia,” signaling that Iraq is more than the modern nation-state created by colonial powers in 1932. It is the great civilization between the Tigris and Euphrates rivers, birthplace to Abraham, recognized as the father of the three great monotheistic religions, Judaism, Christianity and Islam. Iraq is where the first system for writing, cuneiform, was created nearly 6,000 years ago, as well as many other historic firsts, such as the governance of cities and concepts of law, mathematics and science.

When it comes to religion in Iraq, most would think of the sectarian divide within the world of Islam, pitting Shia against Sunni. Sectarianism and the spasms of intercommunal violence that broke out after the fall of Saddam Hussein have continued to shape Iraqi politics and culture, with Shia militias supported by Iran and various Iraqi political factions preying on Sunnis and other minorities in the country, and Sunni extremists sometimes responding in kind.

But until this century, Iraq was one of the most religiously diverse countries in the Middle East. Some estimate that before the upheaval caused by the American invasion to oust Saddam, there were 1-1.5 million Christians in the country. That represented about six percent of the Iraqi population, half of the 12 percent estimated in 1948. Today’s Iraq has about a half million Christians, mostly adherents of seven different Syriac rites, plus Armenians, Roman Catholics and Byzantine Orthodox followers. They now represent only a bit more than one percent of the total population. Over half of Iraq’s Christians have left the country in the past 20 years, and most who remain now live in the Kurdish region in the north, meaning that many are internally displaced, having fled the Arab cities of the south. A few families are returning to Mosul, outside the Kurdish region, after the frantic flight from ISIS in 2014.

The Pope has multiple purposes in visiting Iraq. He is comforting those Christians who remain, demonstrating more general support for minority communities and he is reaching out to Muslim leaders to show his commitment to interfaith dialogue. His meeting with Shia spiritual leader Grand Ayatollah Ali Al-Sistani may prove to be the most memorable of all events. But his greatest gift has been to help Iraq’s political leaders recast their message to their people.

Iraq’s president, Barham Salih, spoke to the pontiff and the people in a moving speech that hit the perfect balance between acknowledging the pain and trauma the country has been through, which has a religious dimension to it, and inspiring Iraqis to recapture the pride of their past to build a better future. Salih reminded Iraqis of their long experience of multiculturalism and tolerance, of Muslim soldiers and citizens guarding Christian churches when threatened by violent extremists and returning a cross to a church in Mosul after the desecration by ISIS. He called the Christians of Iraq the “indigenous people of this land and its salt,…integral to building our societies.” He expressed hope that Iraq’s Christian emigres and refugees would consider returning, to heal the country and move beyond the tragedies of the past. And he called on all Iraqis to reject extremism practiced in the name of religion.

Salih, whom I have known since his days representing the Patriotic Union of Kurdistan in the 1990s, has always been a visionary and reformer. He has often had his eyes on the horizon, dreaming of a more modern Iraq, at the cost of being out of step with a political system still focused on short-term expediency and lubricated by patronage and corruption. This was true when he was prime minister of the Kurdish Regional Government from 2009-2012, representing the more progressive of the two main Kurdish parties, and when he challenged the established system and presented himself as candidate for the presidency in 2018.

The presidency is not the most powerful position in the country, but Salih’s optimism and enthusiasm for Iraq’s future can help move Iraqis on from the frustrations and cynicism about democracy that have dominated the national mood in recent years. Sustained protests around the country since October 2019 over Baghdad’s failures have not spared Salih. Many young Iraqis want to tear down the whole system and start all over again.

The Pope’s visit has provided a special opportunity to think big and to reconnect with Iraq’s history and identity. President Salih has acknowledged that “Iraqis deserve more than they have at present.” Iraq and the Vatican will work on new interfaith initiatives that will highlight Iraq’s contributions to world heritage.

This focus on religious tolerance and humanitarian work to help beleaguered Iraqi communities – Christians and Yazidis in particular – will not resolve the daunting problems facing the country. But it provides a welcome respite from the years of struggle to bring security and prosperity to a country brutalized by dictatorship, the US invasion, civil war and sectarian violence. It has been a heavy burden on Iraqis, lightened a bit this week by some cross-cultural magic.