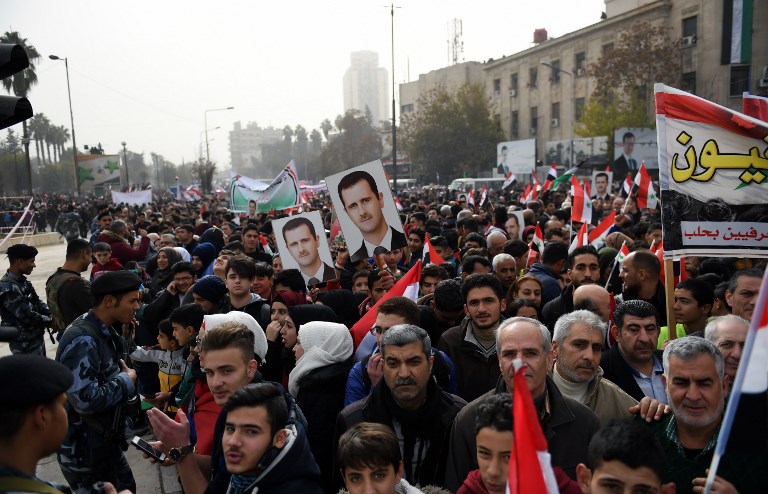 The war in Syria is far from over, but the threat to the regime of Bashar Al Assad is long gone. In some parts of the foreign-policy establishment, this is heresy. Assad, it is said, could still be compelled to step down because of the Geneva process, or because of the threat of a US-backed Kurdish force, or by Western nations refusing to offer the many millions needed for the reconstruction of a shattered country.

But as Nasr Al Hariri, the chief negotiator for the Syrian Negotiations Commission, the umbrella forum of Syrian opposition groups, admitted in London recently, without a credible military threat to the regime, there will never be meaningful negotiations. “The leverage on the regime is the critical issue,” he said. Without it, he asserted, there will never be a political solution.

The fundamental problem in Syria remains that, despite the rhetoric from Western capitals, there is no credible military threat and no sign that one will appear. Without it, Assad has no interest in negotiations.

The best that the opposition’s backers in the West can hope for – and occasionally claim – is that the wider military and security apparatus of the regime, or even the wider Alawite clan, in seeking a way back into the global community, will be willing to give up Assad in return for a return to the fold of nations.

But that position fundamentally misunderstands the last four decades of the regime. Because, far from seeking a seat at the table, the Assad regime has thrived when it has been on the outside, with its back against the wall. Being an outsider is completely in the regime’s comfort zone.

The Syrian regime has always been paranoid and wary of close alliances. During the years of Hafez Al Assad’s rule, when most of the institutions and ideas of the regime were laid down, the country doggedly pursued independence in foreign relations. Relations with all the major countries that surround it – Turkey to the north, Iraq to the east, Egypt to the west – were always strained. Even after the regime signed a “treaty of friendship” with the then-Soviet Union in 1987, Hafez Al Assad maintained communication lines with Washington and European states. Assad the father only understood allies in a temporary sense.

A political dictum, attributed variously to Anwar Sadat or Henry Kissinger, is that “while there can be no war in the Middle East without Egypt, there can be no peace without Syria.” Hafez Al Assad understood this perfectly, always ensuring that his regime was free to act in a way that, at a minimum, stopped others achieving their political goals.

The elder Assad’s political instincts, formed in the heady days of the 1950s and 1960s Middle East, were fiercely independent. He was part of the Baath Party in Syria when it was dissolved by Egypt during the short-lived union of the two countries. He chafed against Egyptian influence in Syria during this period, when the two countries were called the United Arab Republic. Later, he felt the same about the sister Baath Party in Iraq, believing that it sought undue influence in Damascus.

The regime he created, therefore, was often playing the role of spoiler, seeking to disrupt the plans that other powers had for the Levant. That was one of the reasons Syria under Hafez Al Assad was so heavily involved in Lebanon, which had become a theater of intrigue over the Palestinian issue. Influence in Lebanon gave Assad influence in Palestinian circles, in Israel and in Jordan. And because of his influence there, he attained influence also in Cairo, where it really mattered. By remaining involved in his smaller neighbor, Assad was able to ensure the plans of others were thwarted, even if his own plans couldn’t be realized.

Now Bashar Al Assad, Hafez’s son and successor, is back on familiar territory. Syria has become what Lebanon was for many years, the chessboard on which the designs of others will be played out. Global powers like the United States and Russia and regional powers like Iran, Israel and Turkey are all involved in Syria. They all have their various interests – and Assad in Damascus is the lynchpin.

A serious crisis is playing itself out as Turkish forces begin their assault on the Syrian town of Afrin, currently controlled by the Kurdish People’s Protection Units (YPG), a Syrian Kurdish militia.

Afrin highlights the often-conflicting priorities of the players in the Syrian war. For Turkey, the YPG are a terrorist group, allied to a Kurdish separatist party that has waged an insurgency inside Turkey over many years. For Russia, the Kurds in Syria are useful fighters, and even allowed the political wing of the YPG to open an office in Moscow. For months, there was tension between Turkey and Russia on this point. But when the US earlier this month announced that it would assemble a 30,000-strong force to patrol the Turkish border, it appeared to have changed the calculations in Moscow, who may have given the go-ahead to Ankara to attack Afrin.

The complexity of what is happening in Afrin shows how easy it will be for the regime to play the role of spoiler, pitting one side against another, or, as it did with ISIS, supporting the rise of its enemies to bolster its role as a purported pillar of stability. This subterfuge is very much a part of the regime’s playbook; for four decades, the regime has behaved like this, across a much bigger theater than Syria alone. It is extremely comfortable operating in that political space.

As the militaries of other countries move with impunity over parts of Syrian territory, and while Bashar Al Assad is treated openly as a subordinate by Russia’s Vladimir Putin, it can be easy to believe that the regime is on the back foot, struggling to assert itself. But appearances can be deceptive. And as any ballet dancer will tell you, being on the back foot simply makes it easier to change direction.

Faisal Al Yafai is currently writing a book on the Middle East. He is a frequent commentator on international TV news networks. Al Yafai has worked for news outlets such as The Guardian and the BBC, and reported on the Middle East, Eastern Europe, Asia and Africa.