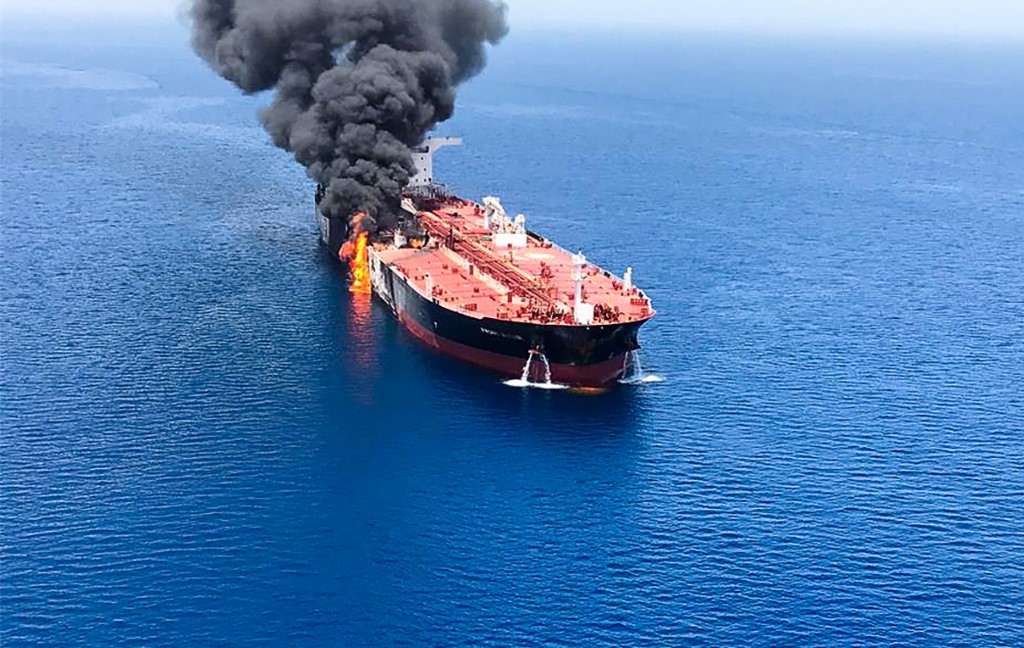 First four ships are sabotaged at anchor off the UAE port of Fujairah. Now, a month later, two more oil tankers are attacked about 100km off Fujairah, on June 13. If this were a movie, we’d be witnessing the set-up scenes in which powerful forces are spiraling inexorably toward a major conflict. But this isn’t a movie, in which conflict will be followed reassuringly by resolution. This is real life and the lives of tens of thousands of people may depend on decisions now being made in capitals from Washington to those in the Gulf.

Someone, somewhere, is trying to set the Gulf ablaze. But whoever it is, this is no time for kneejerk reactions. The Gulf is one of the most heavily armed regions of the world and it is vital that all players hold their nerve.

Almost everything about the events of the past month demands close scrutiny. On May 9, the US Maritime Administration warned US shipping of an unspecified Iranian threat to “commercial vessels, including oil tankers,” in the Red Sea, Bab El-Mandeb Strait or the Arabian Gulf. The advice came four days after the US announced it was sending an aircraft-carrier strike group to the region in response to a number of similarly unspecified “indications” from Iran.

Three days after MARAD’s warning, and even as the USS Abraham Lincoln was steaming through the Suez Canal, four oil tankers anchored off the UAE port of Fujairah were struck in what appeared to be a coordinated but oddly restrained sabotage attack, in which the ships were slightly damaged and no one was hurt.

In a report submitted to the United Nations Security Council on June 7, the three countries to which the tankers belonged – Saudi Arabia, Norway and the UAE – concluded it was “highly likely” that limpet mines had been used and “most likely” that a “state actor” was responsible. They showed great restraint in refraining from naming Iran, although officials in Washington and Riyadh had already done so.

One question still hangs over the accusation. Would Tehran authorize such a provocative act with a US carrier strike group en route, despatched by a president who sees acting tough as the key to his political future? The apparent attacks of June 13, carried out right under the nose of the USS Abraham Lincoln, which has been holding station south of the Strait of Hormuz, would have been an even more audaciously reckless move for Iran.

Mainstream public opinion will dismiss as conspiracy theorizing any suggestion that US agents might have been responsible for the attacks to demonize the Iranians ahead of war. Iranians, however, will have no trouble believing such a theory, and therein lies the danger of deadly escalation that currently threatens the Gulf.

Iranians remember that it was a CIA coup that overthrew their democratically elected prime minister in 1953. Thanks to the release of secret documents in 2013, they also know that Operation TPAJAX was provoked by Mohammad Mosaddegh’s nationalization of Iran’s oil industry, which until then had benefited the Anglo-Persian Oil Company (better known today as BP) rather more than it had Iran.

The coup wrecked Iran’s constitutional monarchy and restored to absolute power the Shah, whose program of rapid modernization, reinforced by the activities of his brutal secret police, offended the sensibilities of many Iranians and led in 1979 to revolution and the return from exile and elevation to power of the spiritual leader Ayatollah Khomeini. It is vital that this history and the consequent Iranian distrust of US duplicity should be front and center in the mind of anyone tempted to consider a war with Iran to be anything other than a disastrous mistake.

In Iraq, where many were pleased to see the back of Saddam Hussein, the US-led invasion nevertheless caused the deaths of hundreds of thousands of Iraqi civilians, gave birth to ISIS, devastated the country’s economy and shattered regional stability. But war with Iran would look like nothing this war-weary region has seen before. Twice the size of its biggest neighbor, Iran has half a million citizens under arms and, even if ultimately defeated, sufficient military capacity to inflict serious damage on the vital infrastructure of American allies in the region, from Israel to the UAE.

Yet elements in Washington, safely distant from the consequences, appear to be pushing for just such a catastrophe. The 2003 invasion of Iraq was triggered by fabricated evidence that Saddam possessed weapons of mass destruction and one of the leading players in that deception was John Bolton, the man who is now Trump’s hawkish national security advisor.

Despite his penchant for saber-rattling, Bolton is no warrior. As revealed in his 2008 memoir, “Surrender Is Not an Option,” he dodged his own nation’s call to arms in Vietnam by joining the National Guard, making “the cold calculation that I wasn’t going to waste time on a futile struggle.”

Whatever the truth behind the tanker attacks, this is a moment to think extremely carefully about the consequences of yet another American-led war in the Middle East. To be sure, the GCC has well-founded concerns about the meddling of Iran in regional affairs, from Yemen to Syria to its sponsorship of Hezbollah in Lebanon. And indeed, it would be helpful if Iranian policymaking wasn’t so opaque and constantly bristling with threats against Arab states on the southern shores of the Gulf – if Iran behaved in a manner that would engender trust among its neighbors.

In the end, it is difficult to conceive of anything more futile than the deaths of thousands, sent coldly to their deaths not in the best interests of themselves or their families, but in the service of the ideology and ambition of an American president seeking nothing more noble than a second term.