On this Nakba Day, Nonviolence Is All the Palestinians Have Left 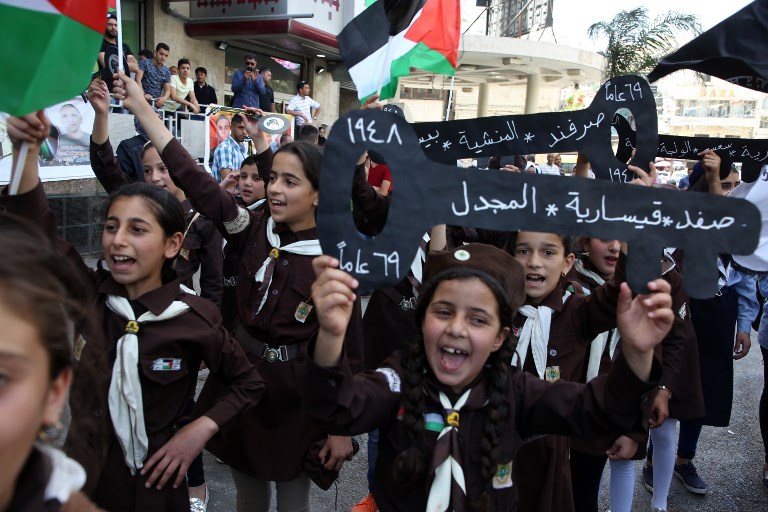 On May 15, Palestinians will commemorate the 70th anniversary of their dispossession from their land when the state of Israel was created. Known as the Nakba or “catastrophe,” the somber anniversary is always marked by tension, and this year is no different. After 70 years of fragmentation, violence and dispossession, the Palestinian people find themselves more isolated than ever. Israel’s military occupation of the West Bank has been perfected to such a degree that its daily brutality barely registers in the international media. The Israelis continue to build settlements at will, entrench their Orwellian matrix of control over Palestinian life and plunder the area’s natural resources with impunity.

President Donald Trump’s administration is even taking the brazen step of rewarding decades of Israeli intransigence by moving the US embassy to Jerusalem, a step long considered to be reserved for the arrival of a genuine and equitable peace agreement. Closer to home, political division due to the physical separation of the Gaza Strip from the West Bank continues to be a source of profound rot inside the Palestinian body politic. With Gazans trapped in an open-air prison on the verge of a humanitarian crisis, Hamas is isolated and largely without any allies. The aging president of the Palestinian Authority, Mahmoud Abbas, continues to demonstrate how out of touch he is with the needs of Palestinians in every public speech he has made. In recent weeks, Abbas has used his pulpit for petty anti-Semitic conspiracy theories. At this point, the only functioning arm of the Palestinian Authority is its security cooperation with the Israeli military. And that certainly holds no benefit whatsoever for the Palestinian people.

Traditional allies of the Palestinian cause across the Middle East have increasingly turned their backs on the decades-old conflict as well. Juggling geopolitical issues from Iran to Syria and the Yemen war, several Gulf states have stood by silently as Trump essentially handed Israel recognition of its control over Jerusalem. The message is a clear one from several Middle East capitals: The Palestinians are weak, listless, divided and not a priority for the Arab world. This is, of course, at odds with the high level of support Palestinians receive from civil society across the region.

Amid all this doom and gloom, is there any shimmer of light for the Palestinians at this year’s Nakba? While it might not seem like much, there is plenty of hope to be found in the recent nonviolent and unarmed demonstrations taking place throughout Palestine. For decades, Western pundits and some Israelis have publicly wondered why the Palestinians don’t embrace nonviolence? Where is the Palestinian Gandhi, the New York Times columnist Thomas Friedman used to ask. If only the Palestinians organized mass nonviolent protests, Western writers argue, then the world would see the vicious occupation for what it is.

In fact, the Palestinians embraced nonviolence a long time ago. While some Palestinians threw stones at Israeli soldiers, the First Intifada in the late 1980s was typified by mass civil society boycotts of Israeli goods, self-imposed curfews and large women-led protests at Israeli checkpoints. At the time, the African National Congress’s nonviolence in South Africa in the form of civil disobedience and boycotts was being heralded for accelerating the demise of apartheid. Indeed, the Palestinian adoption of similar tactics frightened Israel to no end.

The Oslo Peace Process, which began with the Madrid Conference in 1991, is now understood as an elaborate ploy to make Palestinian nonviolent resistance impossible. By establishing a limited form of self-governance complete with security forces trained and overseen by Israel and the US, the Oslo Process created institutions able to crush Palestinian resistance in any form at the source. The occupation and its maintenance were outsourced to Palestinians themselves, and since 1994 nothing like the First Intifada has returned.

Yet today, in this darkest of periods for the Palestinian people, the spirit of nonviolence is alive in the street. For the past two months, thousands of Palestinians have approached the border that separates Gaza from Israel with little more than the shirts on their backs. Many have been killed by Israeli sniper fire and hundreds have been injured. Israel is desperate to paint the protesters as violent youth sent by Hamas, but the images from the frontlines tell a different story.