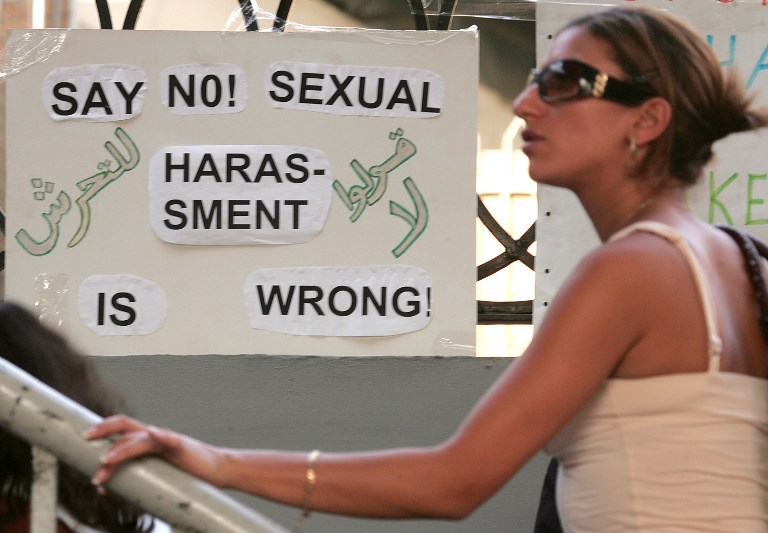 The #MeToo movement continues to gain momentum globally, emboldening celebrities and ordinary women from every walk of life to – finally – speak up about systemic, widespread sexual harassment and abuse.

First propelled by an avalanche of Hollywood scandals, the movement has had disappointingly little impact in the Middle East, or at least in the rarified world of celebrities. In contrast, the groundswell at the grassroots level of society among Arab and Muslim women shows that, if anything, intertwined issues of abuse, chauvinism and gender inequality have even greater relevance here. It is these women, not the glamorous celebrities of the region, who are initiating a discussion that is challenging deeply ingrained taboos.

As far as I know, no Arab female celebrities or high-profile public figures have joined the #MeToo movement, which is a shame. I personally know famous women who have told me in confidence about sexual harassment and even abuse that they had suffered at the hands of powerful men. Nonetheless, thousands of ordinary Arab women have made their voices heard on social media, responding with the Arabic translation of “me too,” ana kaman.

Many of these women’s accounts are incredibly painful to read, detailing sexual violence committed by family members, including fathers and uncles, which was then swept under the carpet. Others opened up about why women don’t talk about such sensitive subjects, fearing a backlash from other women – even their own mothers and sisters – given the taboo still associated with sexual violence and the intersection with women’s rights and gender equality.

This discussion is all the more fraught in the region as people often dismiss inappropriate comments or behavior in the workplace as “cultural” or a “compliment” to an attractive woman, who instead often feels degraded. This is not to discount the role that cultural factors play. While the Arab world has followed the American lead in the #MeToo campaign, many believe the problem is acutely aggravated in the region. I was hardly surprised to see that many posts about sexual harassment originated from Egypt, echoing a 2017 poll ranking Cairo as “the most dangerous megacity for women” from a UN list of 19 cities.

As a reporter during the 2010-11 Arab Spring, I will never forget the images of sexual assault and accounts of groping and rape that emerged during a series of demonstrations, which in other ways were characterized by so much hope. The worst incidents seemed to occur in Egypt, where there were hundreds of reports of sexual assault.

The flood of women adding their voices to #MeToo is a reminder of how this issue affects so many of us personally. My own friend, a journalist covering the momentous events unfolding on the streets of Cairo, was viciously groped by a group of men, while onlookers laughed and took videos on their phones. Traumatized, she feared going out into public afterwards, while people around her – including her male colleagues – would say that women were “responsible” for being assaulted if they decided to demonstrate on the streets.

It took the involvement of a high-profile victim, Lara Logan from the US’s CBS television network, who was sexually assaulted in Cairo’s Tahrir Square during the protests, for the international media to spotlight the issue.

There is a frightening tendency for assaults to take place at large public gatherings, including protests, festivals and even religious events. While the phenomenon is certainly not limited to the Middle East, the #MeToo campaign has highlighted a particularly egregious example – sexual harassment and assault targeting women at the Haj. One of the offshoots of the campaign has been a related hashtag, #MosqueMeToo, launched by the Egyptian-American feminist and journalist Mona Eltahawy, under which women have reported personal experiences of harassment and other inappropriate behavior while in Mecca and other religious settings.

Women have discussed their “devastation” at having precious memories of religious devotion tainted by men deliberately rubbing up against them or other inappropriate touching, which constitutes sexual assault and would be criminal in any location, but is all the worse in a sanctified setting. Victims related how they were completely covered when such assaults occurred and had expected decorum at a holy site to deter such behavior.

This, too, has a personal significance for me. When I covered the Haj in 2008, yes, there were numerous cases involving inappropriate behavior and, when I had problems, I was grateful for the help of young Saudi male volunteers who came to the rescue.

Eltahawy has long been an advocate of gender equality in the Middle East, and her campaign is just one example of offshoots of #MeToo that have special meaning in the Middle East. The campaign has inspired Palestinian-American Yasmeen Mjalli to debut a clothing line with the slogan “Not Your Habibti,” using the Arabic word for “darling.” By confronting the phrase, which is commonly used across the region, she is encouraging Palestinian society to confront sexual harassment.

This kind of conversation would have been unthinkable just a few years ago. In traditional societies with deeply ingrained gender roles, such a discourse will inevitably make some people uncomfortable, but it has to be engaged in if we are to make progress on an issue of basic human rights and dignity.

It never ceases to surprise me how people rationalize these stories by placing blame on the victim. The premise seems to be that given certain circumstances, sexual abuse is somehow endemic to men’s nature and to be expected. Such a view is horribly damaging to both men and women. The tidal wave of responses to the #MeToo campaign has washed away any such pretense. The sheer number of women who have come forward to share their stories has shown how absurd it is to blame the victim. In the Middle East, and elsewhere, a new conversation is emerging that is emphasizing the real challenge – holding men responsible if they behave badly.