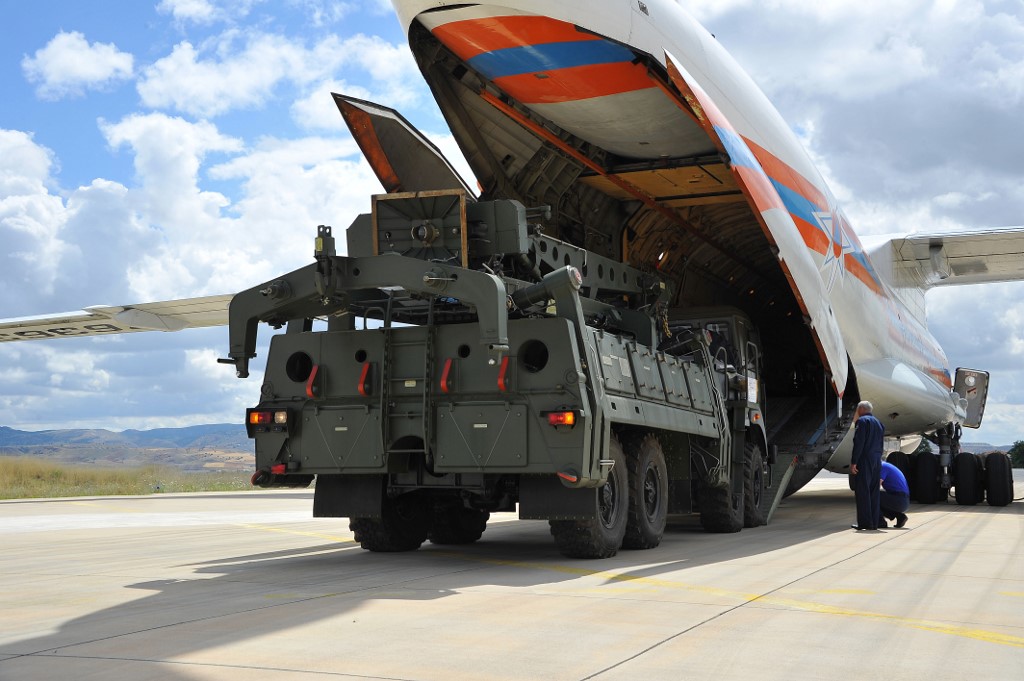 Despite repeated warnings from Washington, Ankara has started receiving shipment of a Russian air defense system. All eyes now are on Donald Trump. On Tuesday, as expected, he stopped sales of the advanced F-35 stealth jet fighters to Ankara. Still, the Turkish government hopes the US president will use his power of veto to prevent Congress from imposing sanctions on Turkey for purchasing Russian military equipment. However, it would be wiser to expect the worse and for Turkey to prepare for sanctions.

At his meeting with Turkey’s president, Recep Tayyip Erdogan, in Osaka, on the sidelines of the G20 summit earlier this month, President Trump blamed the whole mess over the missile defense sale on the Obama administration. But that does not change the fact that the stage now is set for what could easily become the worst dispute between Washington and a key NATO ally since Charles De Gaulle pulled the French military out of NATO in 1966. For despite Trump’s mixed messages, there is no surprise that the Pentagon has now excluded Turkey from the F-35 Joint Strike Fighter Program, the crown jewel of America’s current fighter jet strategy.

American officials had made it abundantly clear that the sensitive next-generation fighter jets could not share the same home geography as a missile defense system designed to target them. The Pentagon had been understandably worried that the highly advanced radar of the S-400s would collect sensitive data on the US aircraft. Defense chiefs were unconvinced by Turkey’s assurance that the two systems would be kept apart in separate locations. The message from the US to Turkey since 2018 has been consistent: “You can have the S-400 or the F-35, but you can’t have both.”

That said, Ankara had apparently already accepted that it would have to do without the F-35s – a considerable loss for a country that was part of the production chain from the inception of the program. Ankara was set to receive 100 fighters, a significant boost to its ageing fleet of F-16s. Yet, more than the F-35s, the real concern in Ankara is the prospect of additional punitive measures.

Under the Countering America’s Adversaries Through Sanctions Act (CAATSA) passed by Congress in 2017, individuals or entities that engage in a “significant transaction” with the Russian defense or intelligence sectors will face a broad array of sanctions. For Turkey, the most severe of these would involve cutting off Turkish entities from US financial institutions, effectively making it impossible for Ankara to raise money through international lenders or investors. Milder steps would target individuals – denying them US visas, freezing their assets and banning all banking and foreign exchange transactions with them. While no final decisions have been made, Congress appears to be ready for a middle-of-the-road approach with specific sanctions targeting Turkey’s defense industry.

For now, however, Congress will exert strong pressure on Trump to fully implement sanctions. In June, the House of Representatives unanimously passed a resolution calling on the administration to enforce tough sanctions against Turkey if Erdogan didn’t reverse course on the S-400. According to Robert Menendez, the most senior Democrat on the Senate Foreign Relations Committee, “The law is clear and unambiguous.” He has repeatedly warned that sanctions could have “devastating consequences for Turkey’s economy and defense sector.”

Turkey’s defense minister, Hulusi Akar, insists that the purchase of the S-400 missile system does not indicate a change in strategic orientation. True, Turkey also appears open to acquiring US Patriot air defense systems – something that Washington had previously made clear would be contingent on Ankara canceling the S-400s purchase. Trump has some sympathy with Turkey’s position and blames the Obama administration for not offering better terms to Ankara during those discussions.

As for President Erdogan, his meeting with Trump had apparently reassured him that the US would not impose sanctions, and that even if it did, the man in the Oval Office had the power to suspend or waive them altogether. But relying on the highly impulsive Trump to save Turkey from Congress is ill-advised; it would be far wiser to try and persuade the US to be more lenient and enable the president to save face.

Therefore, Erdogan must assure Congress that Washington need not worry about an alliance between Ankara and Moscow. On the day the S-400s began to arrive in Ankara, both Republican and Democratic leaders of the US Senate Foreign Relations Committee declared the purchase “a troubling signal of strategic alignment with Putin’s Russia.” President Erdogan must convince the Americans that it is nothing of the sort.

In fact, Turkey and Russia differ on almost all regional issues of strategic importance. From the Balkans and Ukraine to Cyprus and the Armenian-Azeri conflict, or from Syria and Libya to Egypt and Israel, there is not a single arena where Turkey and Russia are natural partners. It was not that long ago, in November 2015, that Turkey downed a Russian jet on the Turkish-Syrian border.

A military confrontation between Turkey and Russia is certainly not in Washington’s interest. Erdogan should also explain that purchasing a missile defense system from the Russians was the price he had to pay to appease Moscow after a Turkish military incursion into a Russian-dominated part of Northern Syria. His message should conclude with a thinly veiled warning to Congress that punishing the Turkish economy could bring about precisely what it fears, and turn a tactical military arrangement with Moscow into a strategic realignment.

Turkish-American relations are on the brink of a historic crisis. Erdogan, Trump and the US Congress have a choice: escalation or damage control. With some rational thinking, there is still time for the latter.