If the Dugong Dies Out, It would Be an Indictment on Us All 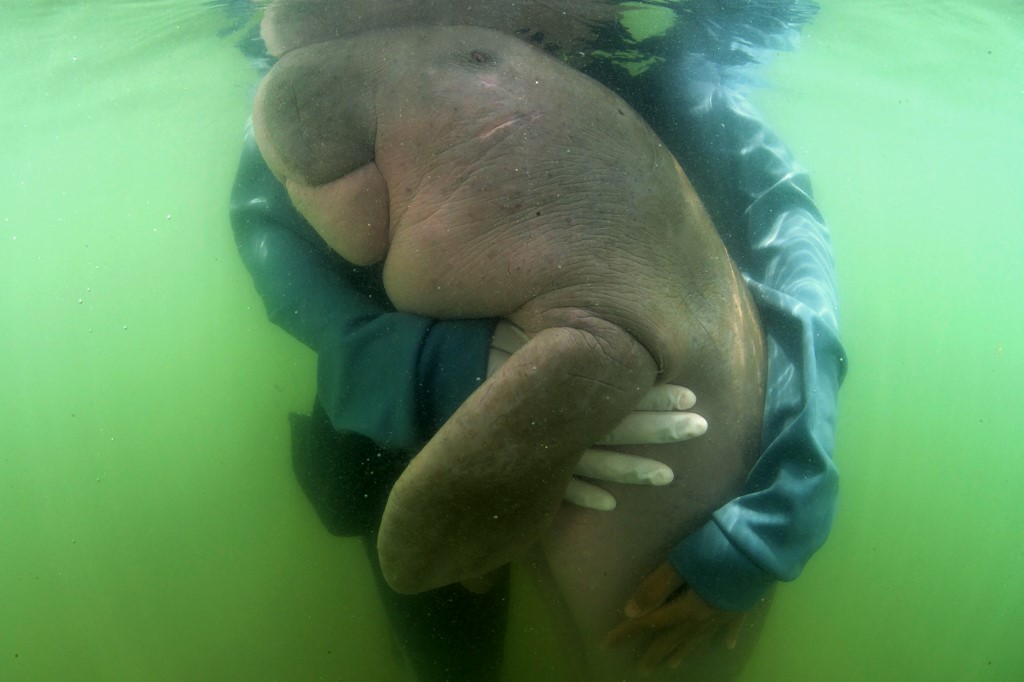 Before the discovery of oil liberated the peoples of the Gulf from the tyranny of the fragile, hand-to-mouth existence they had endured for countless generations, the dugong was fair game. As exhaustive research published in the journal Zoology in the Middle East in 2017 made clear, the large, docile, herbivorous marine mammal played a vital role in the seasonal cycle of subsistence that made life in the harsh desert environment possible. Prior to the discovery of oil in the Gulf, tribes of dugong hunters “may have killed up to hundreds of dugongs each year,” wrote the authors, from the Institute for the Oceans and Fisheries at the University of British Columbia.

This was a bloody business. Traditionally, the animals were herded into shallow water and clubbed to death, but this was not for sport. To the hunters, dugongs represented a vital source of meat, fat, hide and oil. A single dugong weighing up to 300 kilograms would provide as much as 56 liters of oil, “used for cooking, fuel for lamps, medicine, and as a sealant for wooden boats.” The meat was eaten, or dried and traded, and even the bone marrow and tail consumed. The skin was used to make footwear and sword handles and other objects were fashioned from the tusks. Almost no part of the dugong, in other words, went to waste.

Contrast this with the latest discovery of a dozen of the animals washed up on beaches along the shore of the UAE. Dugongs cannot breathe under water and must surface every five or six minutes for air. Trapped and drowned in discarded illegal fishing nets, these animals bring to 20 the total found dead in the UAE this year alone. Every year, many more are found dead.

Dugongs are no longer hunted, for their food or for anything else, at least in the waters of the UAE, which passed a law protecting the animals in 1999. Regardless, still they are dying, and their numbers are declining.

Again, contrast this with the centuries when the dugong was hunted, by tribesmen intimately connected to the rhythms of life and nature and for whom the animal was a precious natural asset to be exploited sustainably. The enemy of the dugong in the Gulf today are not men in boats with clubs, but runaway development, oil pollution and poorly policed intensive fishing practices that destroy the underwater seagrass beds upon which the animals depend for their survival, and casually ensnare creature after creature in thoughtlessly discarded nets. This enemy, it seems, is a more efficient killer than the hunters of old.

The dugong is distributed around the world, and faces challenges in many of its domains. The Gulf, however, with an estimated 7,300 of the animals remaining, is still home to the second-largest community in the world after Australia. But marine biologists believe that since the hunting stopped and the oil bonanza began in the 1950s, dugong numbers in the Gulf have fallen by as much as 25 percent.

The UAE, blessed with extensive seagrass fields off the shores of Dubai and Abu Dhabi, is home to the majority of the dugongs in the Gulf, and has done much to protect them. In 2007 it created the Marawah reserve, the world’s first Unesco-designated marine biosphere reserve. The 4,255 square kilometer reserve includes numerous islands, 120 kilometers of coastline and several regionally important habitats, including seagrass beds, coral reefs and mangroves.

The problem is that the dugong, like all wild animals, don’t know what’s best for them. They go where the tide, and the fancy, takes them. And in waters of the Gulf, shipping, oil production, fishing and runaway coastal development are never far away. As the researchers, one of whom is from Kuwait, point out, there is also plentiful seagrass off Kuwait, Iraq and parts of Iran, “but no reports of dugong populations in these areas since the 1950s.”

There is a lack of joined-up conservation cooperation, not just between Iran and the rest of the Gulf states, but also among the GCC Gulf states. This is bad for the dugong, but is also symbolic of a lack of joined-up environmental thinking across the board that is damaging the marine environment of the Gulf and threatening the many rare and endangered species hanging on in its waters.

Human beings profess to love the dugong and, if ever an animal deserved the label “cute,” this is it. Last month social media went briefly crazy over a young dugong calf in Thailand, which had lost its mother and had attached itself to the humans who rescued it. Photographs of the animal, named Marium, cuddling its rescuers and drinking milk from a baby’s bottle, flew around the world. The story had a grim ending. Several weeks later, Marium was found dead, apparently killed by plastic pollution it had ingested.

It is not enough to simply label animals as cute, and to indulge in a 24-hour cycle of Twitter outrage. The fate of the dugongs, and all vulnerable animals in the Gulf and around the world, is decided not by “likes,” or even fate, but by human action and inaction.

Economic development is, of course, essential for any nation. So too is a thriving fishing industry, especially in a part of the world where conditions make it impossible to grow crops or raise livestock. But it cannot – must not – be beyond the wit of those Gulf nations whose ingenuity has helped them to come so far, in such a short period of time, to protect such a totemic keystone species.

The disappearance of the dugong from the Gulf would not only undermine the foundations of a fragile ecosystem that is already under great pressure. It would also be a shaming indictment of a modern world in danger of forgetting the lessons of a heritage it claims to respect.