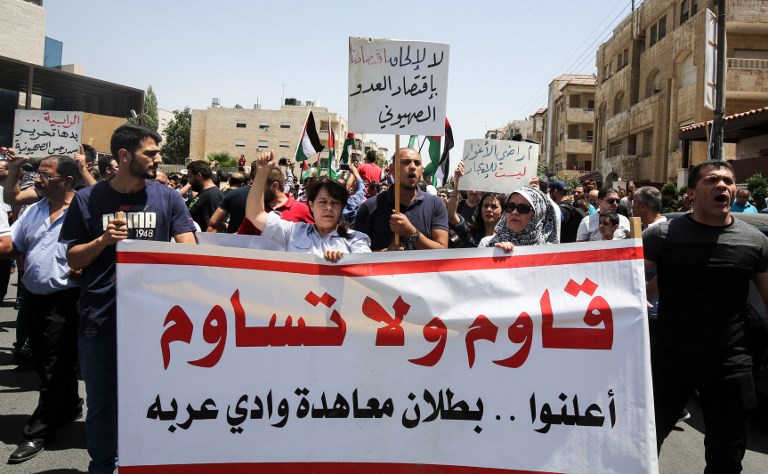 Peace treaties, by nature, are tricky documents. It is rare that two opposing sides are able to cleanly resolve their differences within the confines of a neat agreement. When it comes to Israel and the Middle East, the challenge is all the more difficult. Remarkably, however, the 1994 peace agreement between Jordan and Israel has remained resilient over the last 25 years. The treaty has even withstood the challenges of domestic politics, at least until now.

This week, Jordan’s King Abdullah announced that a provision granting the Israeli government use of two patches of Jordanian land near the border would be terminated. The provision gives Israel access to two farming areas called Baqoura and Ghamr, and is renewed automatically every 25 years unless one side requests a change. After informing the Israeli government of his decision, King Abdullah took the rare step of explaining his decision on social media and underscored that Jordan “will exercise full sovereignty” over its territory.

While the move was met with surprise by the international community and some Israeli officials, the reasoning for this decision is clear. As the custodian of the Al Aqsa mosque compound in Jerusalem, King Abdullah has watched Israel flaunt his authority. Over the last decade, Israel has allowed right-wing activists regular access to the mosque compound, including those who call for the destruction of the mosque to make way for a Jewish religious site. Israel also installed metal detectors and other modifications around the compound knowing that such moves would inflame tensions and further undermine King Abdullah’s authority. Despite an initial tepid reaction to the king’s decision, Israeli officials are now threatening to cut off water to Amman unless he reverses course.

Repeated warnings from Jordanian leaders about the dire state of the peace process, protests against the American embassy relocation to Jerusalem and concerns about the rising violence in Gaza has been completely disregarded by both Israel and the United States. This is not to mention an incident last year in which an Israeli security guard killed two unarmed Jordanians outside the Israeli embassy in Amman. But antagonism from Israel is nothing new.

The timing of this decision to reassert Jordanian sovereignty in the face of an increasingly aggressive neighbor is the far more interesting storyline. And it has more to do with internal Jordanian politics than reckless Israeli behavior. Earlier this year, street protests consumed Amman as the rising cost of living, tax reforms and an overall sluggish economy pushed people to the streets. The catalyst for the major protests in June was a widely unpopular new tax law raising both personal and business taxes in line with International Monetary Fund guidelines to ease debt levels. According to the IMF, Jordan’s debt is equivalent to 95 percent of GDP, and growth is not forecast to increase – meaning the ratio is unlikely to decrease without cuts in spending.

Meanwhile, civil society groups have intensified calls for the government to fight corruption and end wasteful spending. To quell the protests, former Jordanian prime minister Hani Al Mulqi was relieved of his duties, but the underlying problems have not been resolved.

A slightly revised version of the tax-reform bill is now set to go to parliament. With little change in the economy, conditions are ripe for additional street protests to flare up across the country. Many foreign commentators and some in Israel have pointed to the unpopularity of tax reform as the primary factor in pushing about this change to the Jordanian-Israeli peace treaty. As a means of appeasing protesters – and perhaps as a slight diversion – King Abdullah is standing up to Israel by using this forgotten provision of the peace agreement.

This certainly would not be the first time a Middle East head of state used Israel’s intransigence as a political diversion and rallying cry for internal consumption. One only needs to review Turkish president Recep Tayyip Erdogan’s repeated embrace of the Palestinian cause whenever the economy turns sour at home. He has perfected the craft of using Palestine as a diversion tactic.

Yet this political truism should not obscure the fact that Israel is deeply unpopular in the Middle East. At every turn, the so-called Arab street has united behind the Palestinian people in protest of Israel’s occupation and aggressive behavior. At the height of the Arab Spring, for example, protesters in Egypt scaled the apartment building housing the Israeli embassy in Cairo to tear down Israeli flags.

While the majority of Arabs feel Israel must be held to account for its decades-long occupation, the reality is that Israel’s place in the Middle East grows more secure by the year, thanks to shared interests, especially against Iran. But such interests do not have to come at the expense of the Palestinians. Regardless of Jordan’s unique predicament, its move will no doubt be welcomed across the region.