Despair in Idlib: ‘Stop the Bombing or We Will Break the Border’ 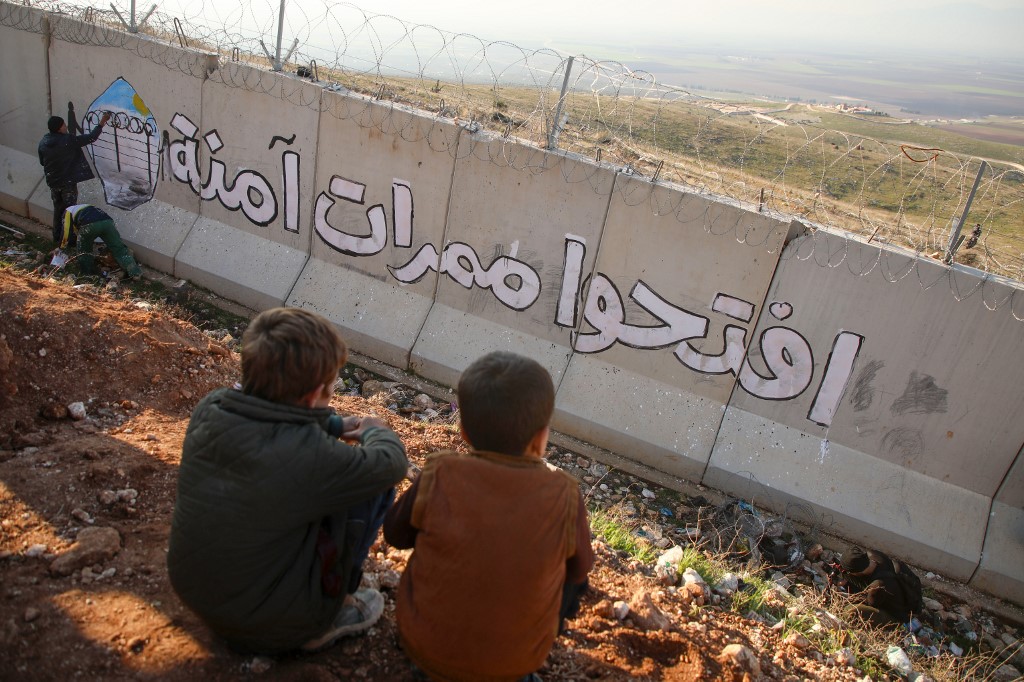 On February 2, a crowd several hundred strong gathered in Idlib province in northwest Syria and began marching toward the border with Turkey. This “Break the Border” protest constituted a desperate plea to the outside world to acknowledge the plight of the people trapped in the last opposition-held province of Syria and suffering the last, brutal blows of Bashar Al Assad’s regime.

The civil war in Syria is in its death throes and the regime is keen to deliver the coup de grace. Last April, Syrian forces, aided by their Russian allies, began stepping up air raids on greater Idlib. The onslaught has continued mercilessly ever since, targeting residential areas and civilian facilities. The situation has deteriorated dramatically in the last two months. For the three million people trapped in Idlib, nowhere is safe anymore.

So, with nothing to lose, the call went out on January 30 to gather three days later in front of the Syria-Turkey border. Some walked a few kilometers to get there, others drove for hours from remote parts of Idlib. Once at the meeting point, they set off to march to the border with Turkey.

Locals and observers within Syria tell me that Al Assad and the Russians have been using terrorists supposedly holed up inside Idlib as a pretext to wrest control of two major regional highways. They have rained the region with artillery fire, cluster munitions and barrel bombs.

According to the United Nations, about 500,000 people fled their homes between December 1 last year and February 1. Another 700,000 people were displaced between April and August 2019. The UN has also documented the deaths of 290 civilians in the past two months, but expects the true number to be much higher.

Displacement has become a fact of life for the majority of people living in this densely populated region, which is home to more than one million people who have already fled other parts of Syria. Local humanitarian workers say the entire province is constantly on the move, running from one area to the next in search of safety. The problem now is that there is nowhere else to go.

There are no camps able to take such large numbers and the existing ones are already greatly overcrowded. The fighting has further strained the humanitarian supply lines into Idlib, and most humanitarian groups have had to reduce their operations. As a result, they say thousands of civilians are sleeping outdoors in olive groves. They have no proper shelter or access to medical facilities.

“The motivation for the attacks is to keep us locked up in a violent nightmare with no end in sight,” said Waleed Al Ahmed, one of the few humanitarian workers left. Yet, the international community has barely raised its voice in protest against this systematic targeting of civilians. They in turn feel that the West is so fearful of huge numbers of refugees that it is prepared to turn a blind eye to whatever Al Assad chooses to inflict on them if they stay inside Syria.

The Break the Border campaign aims to force the West to take notice. One person said to me: “If the West only cares about keeping us in Syria, despite the high risks and lack of protection, then we will highlight our suffering in terms they understand.” It is a sentiment I hear often in my daily conversations with Syrians. A 52-year-old man who was already near the Turkish border told me, “We do not hate our country. But we will be killed if we stay.”

Although “From Idlib to Berlin” is the rallying cry of the campaign, the aim is not to cross the border into Turkey illegally but to highlight the need for a safe haven and, hopefully, persuade the international community to take responsibility for offering some protection to Syrian civilians.

It has become clear that the United States, the European Union and Syria’s neighbor, Turkey, are unwilling to exert substantial pressure — whether military, diplomatic or in the form of economic sanctions — on Al Assad or his main ally, Russia.

The irony is that if the attacks continue unabated, they will bring about exactly what the West fears: wave upon wave of refugees flooding into Turkey and beyond. Such is the desperation that many of those trapped in Idlib believe they have no choice but to flee and are willing to risk anything to escape the killing.

Ahmed Khalid Hassoun, one of the Break the Border campaign organizers told me, “When you lose everything and, most importantly, you lose hope, the only option you have left is to gamble with everything – including your life and the lives of your loved ones – in order to either get a better, safer, more dignified life. Or die trying.”