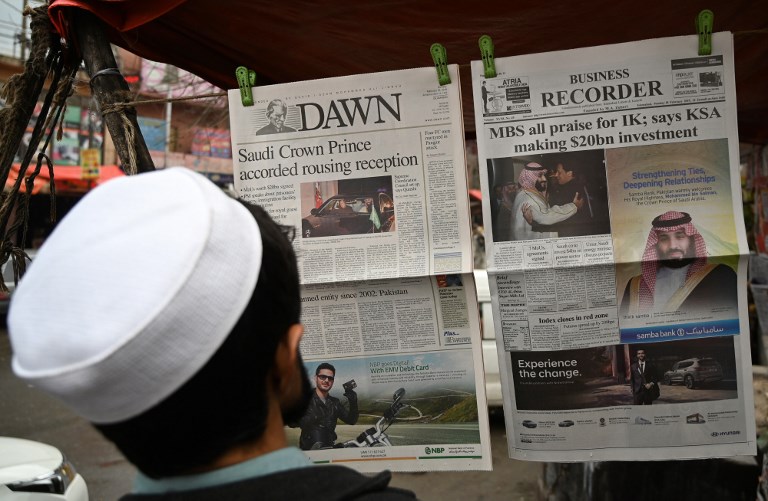 The visit of Saudi Crown Prince Mohammed bin Salman to Pakistan and India represents a new chapter in relations between Saudi Arabia and its two South Asian neighbors. With its tens of billions of dollars of potential investments, Saudi Arabia could position itself as a key player in the China Pakistan Economic Corridor (CPEC) and in India’s energy sector, buttressing its investor presence in South Asia’s growing economies. Although the Pulwama attack that claimed the lives of 40 Indian soldiers in Kashmir risked casting a shadow over Prince Mohammed’s trip, Saudi Arabia appears to have successfully navigated the crisis and de-hyphenated its relations with India and Pakistan.

The crown prince’s trip to South Asia has been a game changer for Saudi Arabia’s relations with Pakistan and India. To begin with, it was the first visit by a Saudi leader for over a decade to either country since the late King Abdullah appeared in New Delhi and Islamabad in 2006. It was also the young crown prince’s maiden visit to South Asia, the success of which is likely to set the tone of his engagement with the region in the future. With tens of billions of US dollars of investment pledges overall, the crown prince may finally take relations with India and Pakistan to a stage beyond that of buyer-and-seller.

Saudi investments in Pakistan are likely to position the kingdom as a key player in CPEC. The two sides signed a $10 billion deal to develop an oil refinery in Pakistan’s Gwadar port, in addition to agreements on acquiring LNG plants, renewable energy and agricultural projects. To demonstrate the breadth of the agreements, Pakistan announced the formation of 10 joint working groups to look after Saudi investments. Beyond Pakistan’s potential for economic growth, Saudi investments in Gwadar may also carry a geo-economic dimension, given the port’s proximity to Chabahar port in Iran. Tehran, which hopes to use Chabahar port as a hub for trade with Afghanistan and Central Asia, is likely to be frustrated by Saudi- and Chinese-backed project nearby at Gwadar.

In New Delhi, the Prince Mohammed announced opportunities for up to $100 billion worth of investments over the next few years. In 2018, Aramco and Abu Dhabi’s Adnoc unveiled a $44 billion investment to set up the Ratnagiri oil refinery in the western state of Maharashtra. In addition, SABIC is reportedly considering the acquisition of a major share in a petrochemicals plant in India, deepening Saudi Arabia’s commitment to India’s energy sector. Conversely, Indian Prime Minister Narendra Modi indicated in an interview to Saudi newspaper Okaz that India would be willing to collaborate with Saudi Arabia on solar power and satellite technology. During the Indo-Saudi joint press conference, it was announced that Saudi Arabia had signed the framework agreement for the International Solar Alliance, a group set up by India and France during the COP21 climate summit in Paris.

However, the Pulwama suicide attack on February 14 risked casting a shadow over Prince Mohammed’s visit. India has accused Pakistan of standing behind Jaish-e-Mohammed (JeM), the group that claimed responsibility for the attack. A day earlier, another attack had also killed 27 members of Iran’s Revolutionary Guard Corps, for which Iran too has since blamed Pakistan. India – which goes to the polls in two months – has vowed retaliation, while Iran has withdrawn its envoy to Islamabad, placing Pakistan under immense pressure.

Amid the tension, Saudi Arabia had to navigate an extremely delicate balance to ensure that gestures toward Pakistan would not be perceived as being directed against India, and vice versa. This was no easy feat. The Indian Express – a liberal newspaper – for example construed a phrase in the Saudi-Pakistani joint statement on the need to refrain from the “politicization of UN listing regime” as a “snub” to India’s effort at having the leader of JeM, Masood Azhar, designated as a terrorist by the UN, despite assurances from Indian officials to the contrary.

Yet, the reception of Prince Mohammed in both Islamabad and New Delhi suggests that Saudi Arabia has managed to de-hyphenate its relations by creating strategic partnerships with both sides. Naturally, Pakistan went all out, greeting the prince with a 21-gun salute and all but closing the capital city during his visit. Prince Mohammed responded by ordering the release from jail of over 2,000 Pakistanis. In New Delhi, Modi broke with protocol by receiving the prince at the airport. In their joint press conference, Prince Mohammed indirectly addressed the Pulwama attack by pledging greater intelligence sharing and counter-terrorism cooperation with India.

By doing so, Saudi Arabia appears to have struck a balance between reiterating Saudi Arabia’s decades-old partnership with Pakistan while affirming its commitment to a greater stake in the strategic partnership with India. Having navigated the troubled waters of Indo-Pakistani relations, the Saudi prince’s visit and his ability to commit tens of billions of dollars of investments will help turn Saudi Arabia into a key player in South Asia that is commensurate with its economic and political size.

Hasan Alhasan is a researcher at the India Institute at King’s College London and the National University of Singapore. His research focuses on contemporary Indian foreign policy in the Middle East. Previously, he served as a senior analyst at the office of the first deputy prime minister of Bahrain.