China, Russia and Iran’s War Games in the Gulf of Oman Are a Means of Plotting an Escape Route 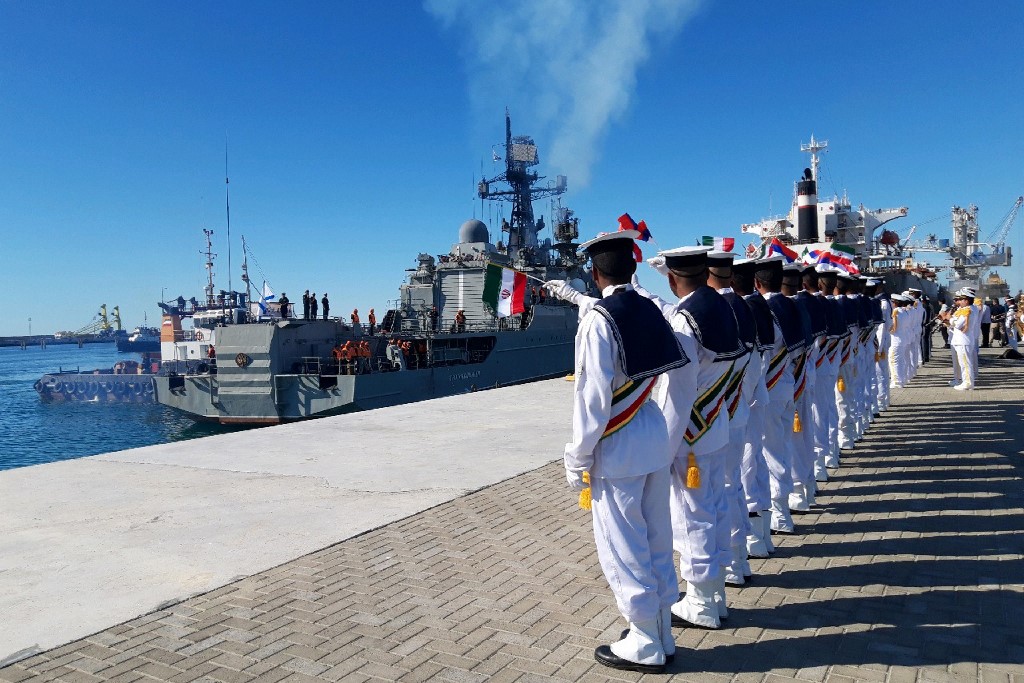 The sight of warships sailing toward the Gulf of Oman is a common one, but the last few days of December provided an unprecedented spectacle in the waters off the coast of Iran. For the first time, Russian frigates joined Iranian ships and a modern Chinese guided-missile destroyer for a four-day naval exercise in the Gulf of Oman and the Indian Ocean. Iran hailed it as the beginning of a new “triangle of power” in the sea.

What is certain is that the exercises were a quite extraordinary display of defiance by Iran and its allies. To have gathered the navies of the United States’ primary geopolitical rivals in such heavily contested waters is a diplomatic success for an isolated Iran. But whether this display signals the beginning of a real alliance between the three countries is less certain. Each country has its own reasons for holding the exercises. In their own way, each was seeking an escape from geography. That convergence of interests is unlikely to last.

The effect of the naval exercises “will be to show that Iran cannot be isolated,” an Iranian navy spokesman told the country’s state TV. For Tehran, that is the primary and most important message, coming at the end of a year in which tensions in the Gulf have rarely been so high. The US blamed Iran for attacks on ships in Gulf waters over the summer and Saudi Arabia blamed Iran for an attack on two of its oil facilities.

Indeed, the rapid assembling of these naval exercises also draws a sharp contrast with America’s Operation Sentinel, an attempt by Washington to put together an international coalition to patrol the waters off Iran’s coast, which is still struggling to get off the ground. Tehran will be pleased with the optics. But whether that would translate into genuine assistance by Beijing or Moscow in the event of a skirmish with the US is debatable. The other two countries have their own reasons for holding the naval exercise, and neither wants a provocative confrontation with a still more militarily powerful Washington.

If Iran is feeling squeezed by America and its allies, Russia feels the same; it too needs to demonstrate it can push beyond the limits of geography.

Despite controlling such a vast land mass, Russia’s direct access to the open ocean is limited by the complicated geography of the Baltic Sea and by the need for its Black Sea fleet to pass through Turkish waters. Its military base at Tartus, on Syria’s coast, is the only place in the Middle East or Europe where its warships can dock.

That makes it even more essential to maintain a close alliance with Middle Eastern countries, particularly those, like Syria and Iran, that are not in the Western camp.

It also explains why Moscow pledged this month to pour half a billion dollars into Tartus over the next four years. Moscow has fought hard to get a foothold in the Middle East and does not intend to give it up.

It is the involvement of China, however, which is the most intriguing. Unlike Russia or Iran, which are both at odds with the international community, China aspires to be part of the current global order. It maintains relations with every country in the Middle East and in the West. Although Beijing has balked at the strictures of the global order and enjoys periodic demonstrations of its ability to operate beyond the rules set by the West, it still intends to manage its rise within the rules.

If China’s involvement is politically surprising, it is not militarily surprising. As a navy, China stands to gain the most from these exercises. At the moment, Beijing maintains a sole overseas naval base, in Djibouti but it is rapidly expanding the sphere of its operations, north and south.

In November, the Chinese, Russian and South African navies conducted exercises off the southern coast of Africa. As with the Gulf of Oman exercise, this involved some hefty Russian and Chinese equipment. Later in January, China and Pakistan will conduct naval exercises in the Arabian Sea, far off the coast of India.

On a map, the result of all of these naval exercises is clear: they will provide China’s navy with experience of operating in a wide maritime arc, from the tip of India, around to the Gulf of Oman, into the Gulf of Aden, down the coast of Africa (where China has been assisting with anti-piracy patrols), and around the tip of the continent.

China’s navy is now larger than America’s and is growing faster than that of any other country. With these exercises, it is gaining practical experience of operating in difficult waters.

Those reasons have separately brought three countries to this moment. There will be others in the coming months, no doubt. But while this triangle of power does demonstrate defiance, it cannot enforce long-term unity. The priorities of Russia, China and Iran are simply too different.

That ought to add a note of caution to the celebrations in Tehran. China is an aspiring global power. Russia still sees itself as one. Iran, for all the undoubted talent of its people, still struggles to get its way in its own backyard. Instead of interfering in the affairs of its neighbors – look only at the ongoing crisis in Iraq – it would do better to work alongside them. A show of force in the Gulf of Oman is not a replacement for the hand of diplomacy across it.