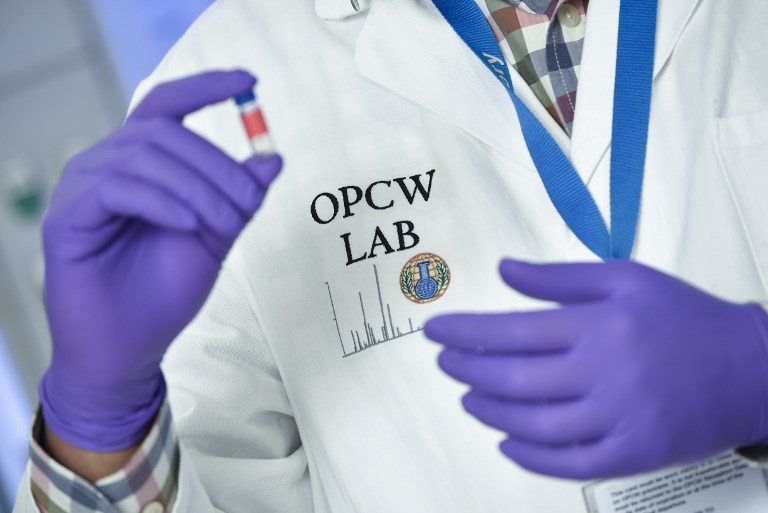 Sometime in the late evening on the last Saturday of November, in the aftermath of shelling on the city, men, women and children in Aleppo began reporting symptoms of a chemical attack. The Syrian regime, which is in charge of the city, immediately blamed the rebels, who are in control just on the outskirts. Russia and the regime claimed the attack used chemical weapons, specifically chlorine gas, and the next day Russian jets struck targets west of Aleppo near the border with Idlib.

The regime then called on the United Nations to condemn the rebels. The following day, Damascus called on the Organization for the Prohibition of Chemical Weapons (OPCW), the global chemical weapons agency, to investigate the attack.

For weeks, the attack has been the subject of a sparring match between the regime and Russia on one side and the United States and its Western allies on the other. The regime said the attack was carried out by rebels. The UK said it could find no evidence of that. The US said the attack had not used chemical weapons. Russia claimed it had “irrefutable evidence” that it had.

This back-and-forth debate is precisely what the regime and Russia wants. It is a sideshow that plays straight into their hands. The regime and Russia’s playbook on this attack, as on others before it, is extraordinarily clear: spread disinformation and use the institutions of the West against it. And it is succeeding.

To understand the playbook, it’s necessary to go back to the beginning of this year. In February, helicopters dropped barrels of chemical gasses over the town of Saraqib in Idlib. Germany demanded an OPCW investigation. Four months later, it reported that the regime had probably used chlorine in the attack.

By then a second chemical attack had taken place, on a larger scale, this time in Douma, on the outskirts of Damascus. Again, the OPCW investigated. Four months later, it reported it was chlorine gas. By then, Douma had been retaken by the regime.

After the Aleppo attack in November, the regime took the extraordinary, and cunning, step of asking the OPCW to investigate.

The very agency that has blamed the regime for 33 chemical attacks on its own people in the past five years, the same agency that verified the Russian-made poison novichok was used in an attack in the British town of Salisbury, was now going to investigate an attack that the regime and Russia claimed was made by the rebels.

The Syrians were in effect asking the poacher to turn gamekeeper. And the OPCW agreed.

By the time the OPCW reports – and on current form it could be in February, or later if the regime hinders its access to Aleppo – the world will have moved on, and Russia and the regime will have accomplished its objectives.

At the beginning of December, the US and the UK said their own investigation had concluded that chlorine had not been used – it was more likely teargas – and that it had been used not by the rebels but by the regime.

But does it even matter? If the attack came from the regime, the US can’t stop the Russian retaliation that already took place less than 24 hours after the attack. If the OPCW in a few months finds it was teargas rather than chlorine gas, that won’t stop the retaliation that has already taken place. If the regime and Russia want to use this – or a future false flag attack – as a pretext to end the ceasefire in Idlib, the US can’t stop that happening either.

Indeed, even this conclusion plays directly into the playbook of Russia, because it raises more questions than it answers. If the regime conducted this false flag attack to frame the rebels, as the US claims, why use tear gas and not chlorine gas, especially as the regime specifically claimed it was chlorine that was used? After all, the regime hardly seems concerned for the welfare of its people. A Russian spokesman, with a straight face, given its previous run-ins with the OPCW, said the US’s claim was meant to hinder the agency’s “unbiased investigation.”

These ultimately unknowable questions are precisely the terrain on which the regime and Russia wants to fight the information war.

All the argument does is move the debate on to the shifting sands of chemical weapons, rather than the factual basis of Russian involvement and conventional regime attacks, which are continuing.

These debates over reality allow Russia and the regime to keep the outside world unbalanced, buying time for the regime and its allies to plan its next moves.

By using the specter of chemical weapons, and appearing to accept the legitimacy of international institutions and norms, the regime and its allies are pretending to fight the information war on the West’s turf – when in fact they are merely obscuring their actions on the real battlefield.