Britain’s Ban on Hezbollah: Why Now? 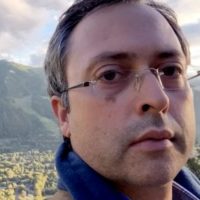 The oddest feature of the United Kingdom’s recent decision to censure the entirety of Lebanon’s Hezbollah as a terrorist group is that it hadn’t happened before. The second-oddest feature is that it is happening at this time. Trying to rationalize the timing has sent Middle East watchers into a tizzy of speculation, ranging from a suggestion of parochial political grandstanding, tinged with posturing against Jeremy Corbyn, leader of the Labour party, on the part of the home secretary, Sajid Javid, to more ominous signals emanating from exasperated intelligence service officials who say there’s no sense in talking to the Iranians, who ultimately control Hezbollah, and that matters are heading to a regional confrontation.

For two years those British spies were cultivating whoever might provide a back channel to Iran’s rising Caesar, Gen. Qasem Soleimani, who also happens to be Hezbollah’s benefactor and overseer. That much was transparent from the political vantage point of Baghdad, where word had it that the recapture of Kirkuk in October 2017 from the Kurds was borne out, in part, of a practical understanding between Soleimani and the British. But whereas the Iranian general garnered political and strategic capital with that stunt, Britain’s advantage seemed mundanely mercantile, with the oil company BP assuming operating control of some of the worthier wells of the province.

Herein lies a bifurcation as to how many in the Middle East understand Britain’s role. One former US official with business dealings in the region gets incensed when his contacts in the region ask him, “Yes, but what do the Brits think?” He lashes out by telling them that Britain no longer has an army to speak of and it is as geopolitically relevant to the region as the Netherlands is.

He is exaggerating, but not by much. In many ways it does seem as if British foreign policy has regressed into the modalities of the first couple of centuries of the East India Company: mercantilism above grand strategy; mercenary in practice, opportunistic in outlook, transient in relevance. However, the glow of a faded empire still commands some respect in the lands once impacted by it, and many in the Middle East cannot bring themselves to write-off the British so casually as that American businessman demands they do.

However, the top dog is still the US, and even those who put stock in what the British may have to say continue to understand the transatlantic relationship as complementary, with the UK following America’s lead. And if the US president is embarking on a foreign policy where everything is a transaction, then so go the British, or as one Lebanese wit drolly put it to me: “Britain is America’s retweet.”

As such, it would be far easier to conclude, as many do, that since Washington has decided on a plan of “maximum pressure” on Iran, then London can show good faith, or at least better faith than that exhibited by the French and Germans, by banning Hezbollah’s political wing, which essentially means that waving its green on yellow flag during Al Quds Day parades under Britain’s grey skies may land one in jail.

It was a small gesture, costing Britain little, but one that can be leveraged for better coordination with the Americans on a host of other issues. Some analysts go further by suggesting that the British may have spotted a trend whereby Hezbollah seeks to become more moderate, going so far as to gradually dissociate itself from the Iranians, thus hoping to ride out the storm of Donald Trump’s furies. Britain’s pressing of the Lebanese would drive home that “break,” or so the thinking goes. Other analysts take their insights further into the weeds, citing some imminent yet opaque movements on the Yemen and Bahrain fronts that may have influenced the decision.

Sources tell me that Hezbollah was caught off guard by the decision even though they were aware that it had been a matter of debate for some time.

An overt, legal presence in London was about more than flags and parades for its leaders. Much of the wealth generated by émigré Lebanese Shiite communities in West Africa sloshes through British banks, and this provided an important revenue stream for Hezbollah’s coffers, as well as masking its own means of shunting money around the world.

Furthermore, London had been a sanctuary for Shiite Islamist dissident groups since the 1980s, and some of those groups, such as the Iraqi Da’awa party, had leveraged that presence into a deep alliance with Britain’s intelligence community, to the advantage of both sides, especially with the former garnering the highest executive offices in Baghdad since 2003. Hezbollah had hoped to anchor a similarly beneficial relationship in British waters.

What the British lose by booting out Hezbollah is access to channels that proved useful during the Syrian war, ranging from sharing information about foreign fighters, to extraction operations for kidnapped British nationals. The most important of the Hezbollah-approved channels ran through Gen. Abbas Ibrahim, head of Lebanon’s General Directorate for General Security. Another channel allegedly had Hezbollah and the British meeting face-to-face in out-of-the-way Bucharest. But as the Syrian war peters out, and given that the British never had exclusivity in such relationships, having to share access with other Europeans, the value of such channels had dropped.

That said, seeking to break off Hezbollah from Iran is a delusion. Gesturing toward the Americans is likewise unnecessary, since the British do not need to do much to look better than the Europeans in Washington’s eyes. Very little of the explanations proffered above help us in understanding the timing. Which leaves the one we cannot see: why pull the plug on a two-year charm campaign that had been directed at Soleimani?

It may be that British intelligence saw what Iran’s foreign minister, Javad Zarif, had seen right before foppishly tendering his resignation: the balance of Tehran’s regional strategy going forward is leaning to Soleimani’s favor, and Soleimani is more interested in confrontation than in talking.

As such, sanctioning Hezbollah may echo Zarif’s theatric affectations. It communicates displeasure, but not much more. It also tells us that the spooks may be in the dark as to what Soleimani has in store.