Arab Countries Struggle with the Stigma Associated with Rape 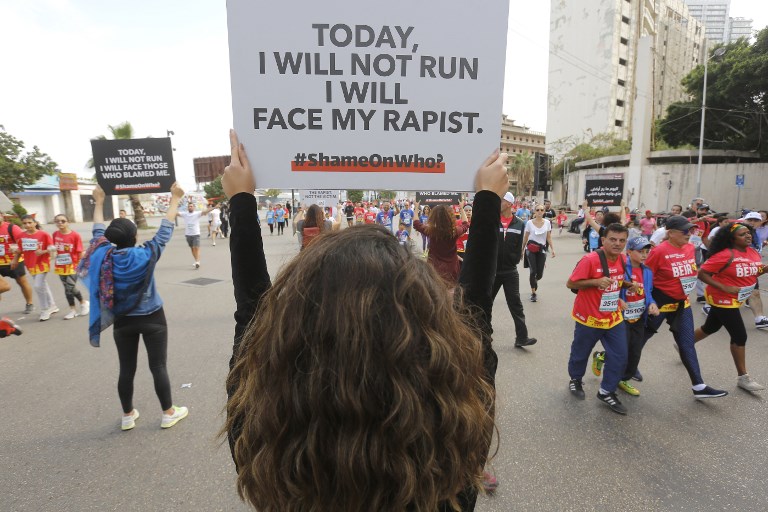 “Help! I’ve been raped!” Manal Issa uttered those words as she stumbled down a Beirut street, desperately appealing to people around her. According to a news report on CNN’s website, a crowd gathered, with some people telling her to calm down and even to just be quiet. One person even chastised her for wearing a mini-skirt, while yet another accused her of being a drug addict, according to the report. Not a single person called the police.

Fortunately, Issa had not been raped – her public appeal was an experiment by the Lebanese women’s rights group ABAAD to highlight the public’s lack of awareness when it comes to rape and sexual assault. The rights group had conducted a weeks-long campaign, #ShameOnWho, addressing social stigma and how victims are often accused of being “loose” and responsible for sexual assaults. “We’re trying to encourage women who are survivors of rape to speak up, to get out of the cycle and culture of victim-blaming,” the group’s founder, Ghida Anani, told CNN.

While this incident was staged, I have seen the real thing before. When I was a reporter based in Beirut more than 10 years ago, I saw a woman running down one of the city’s busier streets in the middle of the night, yelling that she had been robbed and sexually assaulted.

There was a group of people sitting outdoors at a restaurant, but they did not have much of a reaction, with some people shaking their heads and looking away. Two women shouted at the woman, telling her to be quiet because there were children in the area. However, I was with a group of journalists and we ran to the woman and tried to help. A colleague was instantly on his cellphone telling police that there was a woman in distress, but he was struggling to convince them to come to the scene.

“Yes, she is walking and standing up, but she needs help. She needs an ambulance and to file a report, right?” he said. In the end, the police didn’t come. When we offered to take the woman to the police station, she refused and asked us to take her home and not to report the assault. Left with little option, we did as she asked and the attack ultimately went unaddressed.

In that context, the UN Women statistics for Arab and North African countries come as no surprise, showing that more than six of 10 female survivors of violence remain silent and do not ask for support or protection. The agency also found that one in three women have experienced physical or sexual violence at least once in her life – mostly perpetrated by their partners.

Last summer, the Thomson Reuters Foundation released a poll concluding that India was the most dangerous country in the world for women because of sexual violence, human trafficking for domestic work, forced labor, forced marriage and sexual slavery and other factors. In the “sexual violence” category – which included rape as a weapon of war, domestic rape, rape by a stranger, the lack of access to justice in rape cases and sexual harassment and coercion to have sex as a form of corruption – India ranked first, followed by the Democratic Republic of the Congo and Syria. Egypt also ranked high on the list at number 10.

Thankfully, there has been progress. One of the issues in the Arab world is that rapists who marry their victims are often shown leniency or even acquitted. This is changing in some countries, such as Morocco, where Article 475 of the penal code, which previously allowed rapists to avoid prosecution if they married their victims, was repealed in 2014 following a victim’s suicide after she was forced to marry her rapist. Lebanon and Jordan similarly reformed their legal codes in 2017.

Other crimes against women have also begun to spur reforms. For example, the Jordanian government reported 36 “justified” honor killings in 2017, which led to an amendment of the penal code that had specified less severe penalties for crimes committed in “fits of fury” – typically when male family members killed their sisters or daughters because they had brought “dishonor” upon the family. Tunisia’s legislative reform implemented last year is the most progressive in the region, mandating compensation and follow-up support for survivors, while recognizing that men and boys can also be victims of rape.

In some countries such as the UAE, rapists can face the death penalty, but sex outside marriage, or zina, is also a serious crime, and women who have reported sexual assaults have then been arrested themselves.

It appears to have been more clear-cut in the past. An often-repeated story relates how a woman living in the time of the Prophet Mohammed was raped when she left her house to pray. When she reported the assault, people caught the perpetrator and brought him to Prophet Mohammed, who condemned him to death. The woman was not shamed or held accountable for being a victim.

In the present day, we know that some victims may know their attackers, who may even be family members. In those cases, social pressure not to report the crime is reinforced by warped family influence to protect the rapist and “family name.” But a failure to report the crime, especially when linked to shaming and punishing the victim, is never the right answer and will only lead to continued sexual assaults.