Amid a Surging Far-Right, Can France Hold the Line Against Extremists? 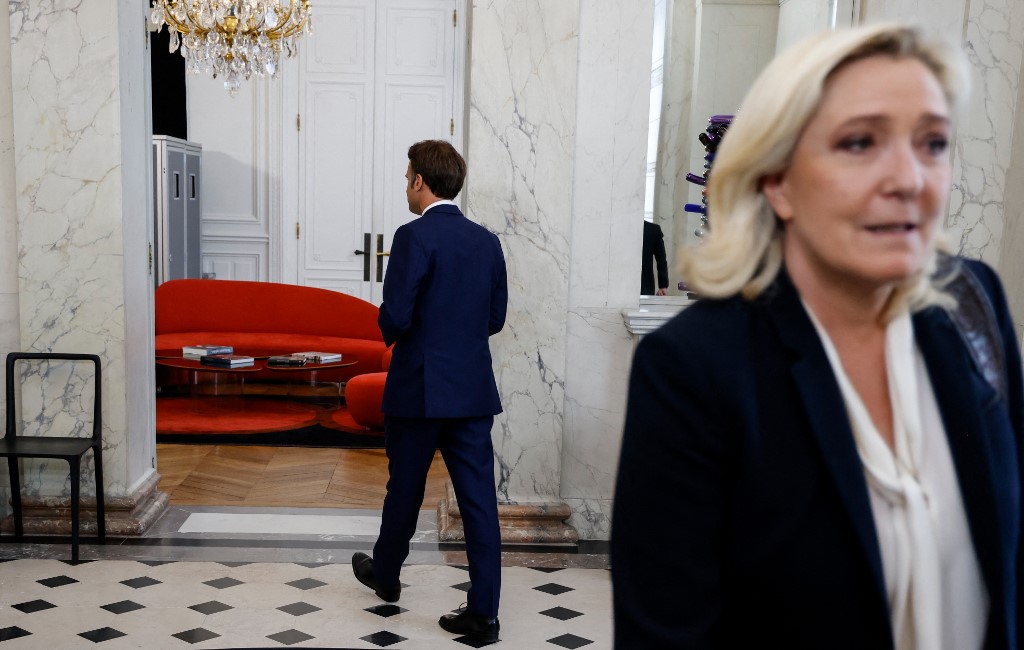 France’s ultimate centrist is now a man squeezed in the middle. Unexpectedly, Emmanuel Macron lost his absolute majority in the French parliament, just weeks after being re-elected president.

Instead, he will now have to govern, squeezed between a left-wing bloc led by Jean-Luc Melenchon, who challenged him for the presidency and came within a whisker of being the runner-up, and Marine Le Pen’s far-right National Rally, which for the first time passed the threshold for inclusion in France’s lower house.

It is a seismic shift for France and a personal embarrassment for Macron: The man who promised to keep the far-right away from the presidency has now been forced to invite them to the negotiating table.

Surprisingly, he did. On Tuesday, Macron took the unusual step of inviting Le Pen to the Elysee Palace for talks. He invited Melenchon at the same time and will meet other party leaders, so it may be merely perfunctory. Yet Macron now faces a dilemma no French leader has for decades: Dare he deal with the far-right?

In one way, the story of this election cycle has been a story of the rise of the French left. Jean-Luc Melenchon stood for the presidency earlier this year and came within a sliver of the run-off: He polled 22 percent against Marine Le Pen’s 23 percent. A fraction of the vote here or there and the resulting presidential run-off could have been different.

At the same time, the presidential election demonstrated how completely Macron’s centrist party has overshadowed the traditional parties of government. The Republicans and the Socialists who, in some form, have been the parties of government for 40 years, collapsed to a small segment of the vote.

Yet all eyes are on Le Pen’s party. At the root of the tussle over a governing coalition is more than a question of political horse trading – there is, as the French love, a question of philosophy.

France now has to finally deal with a question that other European countries have long faced: Whether to engage with or ostracize far-right parties.

Across the continent, other countries have grappled with the issue. Austria was the first to break, allowing the far-right Freedom Party into a coalition in 2000. Since then, other countries have followed, most notoriously Italy, which made Matteo Salvini, the head of the League party, deputy prime minister.

Attempting to steal the clothes of the far-right in France is dangerous. Nicolas Sarkozy tried it more than 10 years ago, seeking to appropriate anger against immigration. He ended up merely legitimizing the sentiments of the far-right, and voters sought out the original rather than the imitation. There is an argument that it was Sarkozy who started the National Front’s long march to the National Assembly.

A more instructive example for Macron may be Germany.

Five years ago, building on public anger at Germany’s response to the migrant crisis, the far-right, anti-immigrant party Alternative for Germany (AfD), having won no seats at all at the 2013 election, surged to third place and 94 seats – a shock equivalent in scope to the National Rally (the rebranded National Front) in France this time around.

Yet AfD, in keeping with the German policy of refusing coalitions with the far-right, was kept out of government, and in the last election in October, AfD lost seats and dropped to around 10 percent of the national vote. They still hold 83 seats, but they have been kept out of the governing coalition again and, with four larger parties, the momentum the group showed in 2017 has stalled.

How did the Germans do it? One reason was a reframing of the migrant issue, which was a prime motivator for AfD voters.

Angela Merkel’s pledge in 2015 “Wir schaffen das”, “We’ll handle it”, became a way of framing Germany’s handling of the migrant crisis as the nation coping under difficult circumstances. Voters wanted to see Germany succeed, not fail, and consequently AfD’s attacks on Merkel on immigration often failed to land.

That will be Macron’s best hope for dealing with Le Pen. Not treating her and her party as a normal political party, but not seeking to co-opt extreme policies either. Instead, Macron should shift the agenda, and show that he and other parties in the coalition are getting on with the difficult task of governing – while Le Pen is still playing the resentment card on immigration, or defending Vladimir Putin in the midst of his war against Ukraine.

Otherwise Macron, having attacked Le Pen as an authoritarian whose views on Islam would start “a civil war,” will be lambasted as the French president who finally brought the far-right rabble into the fold of government.